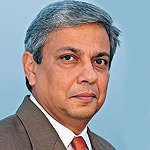 08 November, 2014
Print this article Font size -16+
It seems to me that there are two-and-a-half types of people who say that we should always try to accommodate China. The first are the uncompromising peaceniks. For them, it is their manifest fancy — and hence, the Almighty's desire — that Asia's two largest nations live together in never-ending friendship, happiness and peace. This lot doesn't care much about facts. India and China living peacefully as magnificent allies of Asia is too compelling an image to be tarnished by facts. The group is small in number; yet, quite significant in what I call its "English language fourth estate influence".

The second bunch of Hindi-Chini bhai bhai fellows are what I call the "Chindia chaps". Typically, these are Indians who have been to Beijing and Shanghai, and even to places like Chongqing and Xian, more than once — often as guests of Chinese institutions or international bodies organising conferences in China. They have attended workshops, written papers and interacted with Chinese academic counterparts. And they seriously believe in their portmanteau construct called Chindia — one in which China and India will together create the largest and most cooperative economic powerhouse of the world. No Chinese in high government or advisory position that matters ever speaks of Chindia. Only Indians do. It is as if creating Chindia gives India the entrée to the high table, as a mythically equal partner of China.

The remaining half is business. I say half with a reason. At one level, Indian business would love to operate in China on a much larger scale — for which it requires our government to be accommodating with the Middle Kingdom. Equally, it has realised that doing business in China is tougher and more risky than in India and elsewhere. From an unabashed desire to invest in China, business now has a more nuanced view. While Indian companies would prefer better economic and business ties with China, they are not China champions like the major US corporations. Indeed, many are concerned about China seeking to make commercial inroads into India.

The pro-China groups in India are barking up the wrong tree. They don't, and won't, understand that China doesn't give a fig about India. It has a very simple two-fold view of itself: to be the most powerful and influential nation in Asia and, with the US, become the Club of Two that defines global polity. India has no place in this scheme; and China will never hesitate to put us down if there is the slightest hint of our questioning this dual mandate.

The Chinese politicians are also quite contemptuous of India. Since they care nothing about vox populi, they see no merit in our democracy and elections. Instead, they see great demerit in our inability to force a more rapid pace of growth. In their eyes, we are a second grade country with poor roads and highways, poor manufacturing, severe power shortages, horrible urban infrastructure and significant poverty that is demanding greater rights in global capitals.

Let's have no doubt about a few things. China will always support Pakistan, come hail or high water. It will sooner or later start damming the Tsangpo (which becomes the Brahmaputra in India) and the Sutlej. My unlettered guess is that the work is about to start, or has just started — especially across the Sutlej. It will continue to make strident claims on Arunachal Pradesh. It will significantly strengthen its capabilities to move troops, artillery and other fire-power along its borders with India — both across Ladakh, Himachal and Uttaranchal in the west and Arunachal in the east. It will incessantly complain about the Dalai Lama if he visits border areas. It will never allow India a hope in hell of a permanent UN Security Council seat. And block any move that gives India a greater role in today's league of nations.

China is no friend of India's. It is, at best, an occasional bedfellow that can suddenly leave you in the lurch. China cares only for China, and if India helps in furthering China's interests, it can tag along. Otherwise, it will be cut out. We can't think of allying with China with any degree of permanence. Unfortunately, we still don't seem to understand that. One day, we will. Hopefully, before it is too late.

The solution is to be real. To realise that we need to significantly strengthen our borders; call their bluff with credibility; focus on rapidly growing the economy; and build strong relationships with the US, Russia and certain key nations in Asia. And to never shirk from telling them to back off when they intrude into our affairs. That requires a strong state with a sophisticated veneer. Can we get there? You decide.