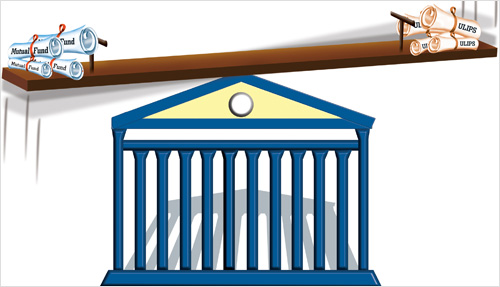 Waqar Naqvi, CEO of Taurus Mutual Fund, is in a dilemma as he prepares next year's sales budget (roughly Rs 10-12 crore) to increase the present Rs 2,500-crore corpus. The problem is that these expenses have a big impact on the asset management company's (AMC) financials. "There aren't many options left," he says. "We will have to strategise how to bleed in a manner that leads to growth." Taurus has more than doubled its spend for the next year.

For most MFs, the ban on entry loads has affected revenues (while there was no load on debt funds, entry loads on equity funds were a big help). There isn't much enthusiasm from retail investors as well. Then, there is competition from MF clones: the unit-linked insurance plans (Ulips), which have become the staple of life insurance companies; regulated by the Insurance Regulation and Development Authority (Irda). Until 1 September this year, when new guidelines were introduced for Ulips, insurance companies had what may have been an unfair advantage because no caps were placed on their fees and expenses.

The mix of cutbacks on fee income, higher marketing expenses to take on Ulips and tepid investor interest poses new difficulties for MFs.

Redeem Yourself
Oddly enough, between 1 August 2009 and 30 July 2010, MFs took in just over Rs 39,000 crore — 50 per cent more than the previous year. In comparison, Ulips took in Rs 17,271 crore, growing by 30 per cent. "The scenario looks bleak for MFs only because of strong redemption pressures by retail investors," says Hemant Rustagi, CEO at Mumbai-based Wiseinvest Advisors. "People who were stuck since 2007-08, exited when the markets rallied, cashing out with marginal profits." Ulips, however, enjoy a lock-in period (originally three years, now five).

Spending on marketing, and incentives, matters. If AMCs do not pay distributors well, their products will not be recommend to investors. And if AMCs pay more, their costs will rise. So they are foregoing part of their other income — mainly management fees — and targeting their marketing expenses more cost-effectively.

Distributors on average still get an upfront commission of 0.5-0.75 per cent and a trail commission of 0.50 per cent over one year. Ulips offer higher commissions. Sebi had, in fact, made a case for it regulating Ulips — given their similarity to MFs — which may have levelled the playing field to an extent. But Irda won that battle, and quickly changed rules. But can that address the competitive advantage of Ulips?

A Matter Of Size
Management fees account for 80-90 per cent of an AMC's income, which, in turn, is linked to the corpus: the larger the AUM, the higher the fees. Even though equity funds make up only about 25 per cent of the industry's total AUM, they are money-spinners, from where AMCs are willing to sacrifice a little. The average management fee from income and liquid funds — the most popular debt funds, and which account for two-thirds of the industry's assets — is 0.10-0.25 per cent of AUMs; much lower than 1 per cent for equity funds.

Fees as well as expenses are levied slab-wise and scheme-wise. On an average, most AMCs pay three quarters of a percentage point, or 75 basis points (bps), of fresh MF collections as expenses (including distribution costs), compared to the 1 per cent they take as management fees of the total AUM. So, as long as the corpus keeps growing steadily, most AMCs will do well.

Let's take an example. If a fund house that manages Rs 5,000 crore has to pay 50-75 bps of fresh investment as distribution commission, its total management fee income will drop by 16-35 per cent. For a smaller AMC, the drop can be 50-70 per cent. But, from the second year, since there will be no distribution charge, its management fees will rise to 1 per cent.

For insurance companies with a similar corpus in Ulips, the impact is lesser; even after the management fee has been reduced from 2.25 per cent to 1.35 per cent after January 2010. Moreover, Ulip investors continue to bear a chunk of the distribution costs, something that mutual fund AMCs do not have the luxury of.

Therefore, rising costs and declining income are limiting MFs' ability to expand their distribution network. Even within the industry, there is a widening and substantial gap between the big and small players. The 10 largest AMCs account for nearly 80 per cent of the industry's AUM; the bottom 10 form just over half a percentage point of that, and getting smaller (in August 2009, the bottom 10 accounted for 1 per cent of the AUM).

This implies that loss-making AMCs will face longer gestation periods and new entrants will take more time to break even. "We are targeting a break-even in next 3-4 years (up from 2-3 years) at an operational level," says Rajiv Anand, CEO at Axis AMC, which started less than a year ago but has a corpus of Rs 4,000 crore thanks to Axis Bank's network. "Distributors are limiting themselves to selling products of a select band of MFs, and getting onto their shelves has become more difficult," says Anand.

Competitive Advantage
Just as MFs were hit by the removal of entry loads, the new Irda guidelines reportedly created a hole in the insurance firms' pockets, but it has created uncertainty about how distributors will realign themselves with the emerging trends when commissions will not play a big role. G. Murlidhar, COO and CFO at Kotak Mahindra Old Mutual Life Insurance, says, "It is too early to take a call on the impact of the new norms but, in the short-term, sales could be affected and we may see some pain as an industry."

Biggies like LIC and SBI Life Insurance, however, aren't too worried. "We have tweaked the product (Ulips) to meet Irda guidelines, and our expense ratio for new business premium has been 8 per cent compared to 25-35 per cent of our peers," says Rajiv Gupta, executive director of marketing at SBI Life Insurance.

He has two reasons to be sanguine: bancassurance across 16,000 branches of SBI and associate banks, and the 4-10 times higher productivity of SBI Life compared to peers. I-Pru has rationalised business in rural and semi-urban areas where direct servicing requirements have not been high, to maintain profitability.

Changing Tracks
Insurance companies plan to bring down the concentration of Ulips in their product mix from 80-90 per cent now to 65-75 per cent. Distributors, too, will have to adjust to the emerging trends of lower commissions. "Ulips will still continue to be favoured, but will have to sell thrice as much as they used to," says Madhivanan Balakrishnan, executive director of ICICI Prudential Life Insurance. What will emerge are more strategic tie-ups such as the one between Axis Bank and Max New York Life Insurance, "where insurance companies dilute their stake in favour of the banks", says Abizer Diwanji, executive director at KPMG.

MFs, too, will have to seek new ways. Already, some are creating niche products. Motilal Oswal AMC launched a fund that invests in Nifty stocks, adjusting weights according to fundamentals such as retention of money on the balance sheet of the company, return on equity, networth and price to generate greater returns. "For survival, one will have to re-engineer the business model where product differentiation is key, which is cost effective and, more importantly, which makes money for our client," says Lokesh Nathany, senior vice-president and head of sales and distribution at Motilal Oswal AMC.

Fortis, Benchmark, I-Pru and Mirae AMCs have decided to cater to specific verticals — fixed-income business, launching exchange-traded funds, managing offshore funds and equity funds, respectively. Talks are DSP BlackRock and Principal AMC plan to shift to ‘no upfront commission model' and will focus on trail commission, like Bharti AXA Investment Managers. "But MFs are a distributor-led business and we will have to work with them to remain commercially viable," says Suresh Soni, CEO of Deutsche AMC. "Players will have to work on distributing products through other channels like the Internet and stock exchanges." The stage appears set for Darwin's Law: survival of the fittest.