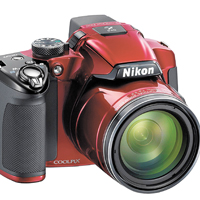 08 November, 2014
Print this article Font size -16+
The P510 from Nikon fits into that category that is nowhere near the casual point-and-shoot camera, far from the advanced look-and-shoot compacts with some settings to fiddle with, and not quite the proper D-SLR. It’s at the highest end of the compact camera bracket, even though it’s still a “Coolpix” where you have various photo-enthusiast devices, often with one strong distinguishing feature. It’s a category that professionals will not outright pooh-pooh and may even tap into for a second more portable device for some situations.
The P510’s One Great Thing is its zoom — all 42x of it. If you plan to do some outdoor shooting without carrying heavy artillery, this is a camera to consider. It has a comfortable grip and rounded edges and comes in black and in red — which I personally dislike. Cameras just shouldn’t try to be red unless they’re housed in smartphones. This is a 16 megapixel camera with a focal range of 24-1000mm (equivalent). It isn’t portable in the throw-into-your-bag sense — in fact, it has to be treated with as much care as you would a D-SLR — but at 1.2 lb, it isn’t cumbersome to strap around you. There’s an extruding lens and its LCD screen slips out to tilt up or down but doesn’t swivel. There’s a pop-up flash. Controls are easy to get to and use but the menu, as almost all reviewers agree, needs to be smartened up.
To use this camera and its zoom, you have to have a pretty good idea about what you’re doing — it isn’t for the absolute novice though there are presets to use. Still focusing isn’t always easy. There are good noise reduction filters but that doesn’t mean it’s good for indoor or low-light shots. The price of the P510 is Rs 23,950 — pretty good value for money if you do the type of shooting it’s good for.
Solid And Fast
In India, Huawei recently launched the Ascend G300 (also called U8815), for Rs 13,490 (you may be able to get it for less) and it’s more than worth a look. It’s heavier than most 4-inch-sized phones. So it isn’t for those who want a slim sliver of a phone but for those who like to feel some reassuring weight in a gadget. The G300 has a silver back and white edges and some attempt has been made to make it stand out from the crowd of standard black slabs you see everywhere. In an Android world dominated by Samsung, HTC, Sony and LG phones, it’s a challenge for Huawei to enter the mix. That doesn’t mean it can’t make a good phone. Not just that, recently at the IFA show, it launched five Android devices and introduced an interface, Emotion, for its own take on how users should interact with apps on a phone.
The phone works fine. You can’t expect blazing fast and slick, but it delivers value for money. It’s running Gingerbread and has a 1GHz Qualcomm processor. I found that the device charged pretty fast and had rather good battery life and standby on its 1350 mAh battery. The screen is very nice, specially for a budget phone. The interface is nice and stylised. I found browsing lightning fast. Surprisingly so. It comes with its own cloud service as well. If you’re okay with a phone that isn’t feather-light, this one is impressive.

Now, A Dual-Sim Tab
This is not a tablet you’d want to drop on your foot. Of course, there’s no tablet you’d be keen to drop anywhere, but in this case, while I can vouch for the tablet, I can’t answer for your foot. To put it more politely, Kobian’s Mercury MagiQ is heavy for a “phablet” if I may use a perfectly odious but increasingly common term. It’s a 5-inch device, smaller than the Samsung Notes and about the size of the Dell Streak. At Rs 12,700, the MagiQ sits in the low-cost tablets category. It’s a dual-SIM tablet — two neat slots for two SIMs underneath the plastic easily-openable back flap. It runs on a 1GHz single core processor with 512MB RAM and 4GB of expandable storage. It browses fast, handles videos just fine, doesn’t heat up, and behaves nicely. It has something going for it.
There are other ways this little homegrown tablet is making a brave stand. It runs Android 4.0.3, has a nice non-annoying skin, (Geek for user interface) and importantly, a comfortable keyboard (virtual, please) which isn’t cramped. The MagiQ has both a primary and secondary camera, but I wouldn’t recommend either indoors or the front-facing in low light unless you don’t mind starring in a horror film. The rear camera claims to be a 5MP but  “support” up to 12MP, but I could only coax blurry images out of it.