The Business Of Media 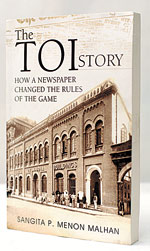 08 November, 2014
Print this article Font size -16+
The TOI Story’ is really the Samir Jain story of how the Sahu Jain family scion turned the Old Lady of Boribunder into a ‘mini-skirt-wearing’ media giant, to quote a former Times Executive Director Pradeep Guha.

There is a chapter that takes us through the history of how The Times of India in its earliest avatar was launched in 1838 as ‘The Bombay Times and the Journal of Commerce’. It then came to be co-owned by its first professional editor Thomas Bennett and Frank Moris Coleman in 1892 who christened the company Bennett, Coleman & Company Ltd (BCCL). Subsequently, BCCL acquired its first Indian owner in the form of Ram Krishna Dalmiya in 1946 in a deal he cut in the Taj Mahal Hotel in Mumbai for Rs 2 crore. Tragically, he lost big money and turned for help to the Sahu Jain family of Najibabad into which his daughter Rama had married.

BCCL therefore again changed hands and Shanti Prasad Jain, father of Ashok Jain and grandfather of Samir Jain, acquired the controlling interest in the company for Rs 2.5 crore in 1955.

But thereafter, the prose is almost exclusively dedicated to Samir Jain. He slipped into the saddle noiselessly as vice-chairman (VC) in 1984, but the media storm he generated has still not abated. The young VC minced no words about his intent in his first introductory meeting with the editors when he said: “Newspapers are vehicles for carrying advertisements, and news is what we print to fill in the gaps between the ads.”

A large body of journalistic opinion has made out Jain as an ogre who has sacrificed the tenets of good journalism on the altar of mammon. However, Menon tries to reverse that impression with a more sympathetic understanding of the achievements of the BCCL owner who has driven the company and its brands for nearly 30 years pushing up revenues from Rs 60 crore in 1982 to the current level of around Rs 6,000 crore.

However, there is only Samir Jain in the book. Vineet as MD and younger brother of Samir, who today is larger than life in BCCL, barely finds mention; nor does the rest of the family; nor do key executives like Pradeep Guha and editors like Jaideep Bose who creatively implemented Samir Jain’s dreams.