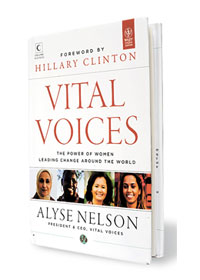 08 November, 2014
Print this article Font size -16+
This is about the triumph of grit over adversity, determination over antagonism and change over status quo. It is about the struggle, pain and accomplishments of gutsy women who, refusing to play the hapless victim, have dared take on deeply entrenched societal maladies such as human trafficking, detrimental cultural practices and violence. Alyse Nelson, the author of Vital Voices — and the president and chief executive officer of Vital Voices Global Partnership — has presented an eclectic mix of stories about women from diverse backgrounds, cultures and geographies who have stayed the course in the face of insurmountable challenges to make a positive change in their families, communities and the world.

Nelson has unfurled the multifarious shades of the unique leadership brand personified by these women. The cornerstone of their leadership style is embodied in a powerful driving force and sense of mission, an ability to promote sustainable change through local solutions, based on their deep understanding of the regional context, a capacity to partner with stakeholders who do not necessarily support them, and the capability to combat tough challenges by deploying bold and creative ideas, frequently at great personal risk. These qualities tie up into the fifth dimension of leadership, that seeks power for empowering others, with a multiplier effect of lifting entire communities and creating a leadership pipeline.

The stories abound, each replete with hope, inspiration and guidance. Of Marina Pistakova, who — fired by the mission to fight domestic violence against women — pioneered the first-of-its-kind domestic violence hotline in Russia, successfully engaging with apathetic stakeholders such as the police, prosecutors and judges, and turning them into her reluctant allies. Of Asha Hagi Elmi, who advocated individual identities and rights for women by forming a sixth clan for women, the primary victims of the internecine clan warfare, famine and disease ravaging Somalia. There are stories about the commitment and vision of Combodia’s Mu Sochua, India’s Sunitha Krishnan, Israel’s Rita Chaikin and Kenya’s Rebecca Lolosoli, who have made transformational strides in their drive against domestic abuse and human trafficking. Pakistan’s Roshaneh Safar, Bahrain’s Afnan Al Zayani and India’s Jaya Arunachalam stand out for their work towards the economic empowerment of women. Lubna Al-Kazi is noteworthy for getting Kuwaiti women their right to vote and stand for political office, denied to them despite high levels of education, till as late as 2005.

The book also traces the evolution of Vital Voices — a pioneering organisation that began as a government initiative in the Clinton Administration in 1995 — into a nonprofit, nongovernment organisation that hails ‘women’s rights as human rights’, supports 12,000 women leaders across 144 countries and surges ahead with a mission to put more women at the decision-making table. Vital Voices assists this movement through training, media visibility and networking events that provide a forum for sharing problems and success stories, finding creative solutions and learning from each other.

Nelson positions the need for the participation of women in political, economic and social processes as an economic imperative, apart from reasons embedded in morality and justice. She offers strong evidence in support of the premise that development accelerates when women are empowered, and is stalled when they are oppressed. The book reminds that women empowerment is key to a more peaceful, prosperous and sustainable world. And to achieve this, it is essential to galvanise the political will by engaging men, religious leaders, corporates and other stakeholders who perceive women’s empowerment concomitantly with societal progress.

The reviewer is a learning and development consultant based in Mumbai