The Boy Who Wanted His MTV 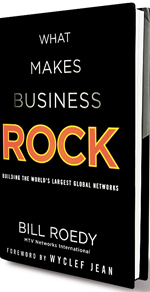 Author's Details:
Bill Roedy was chairman and chief executive officer of MTV Networks International during 2007-11. At MTV, he oversaw all its international channels and multimedia business operations for dozens of brands. A US army veteran, Roedy served HBO as vice-president during 1979-89. He holds an MBA from Harvard University.

Badhe is a retail and marketing consultant