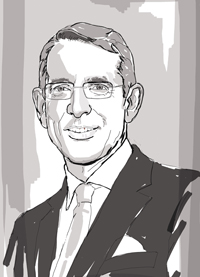 Compared to China or even Indonesia, India's level of investment is small. But India can do much more. It has a lot to do with perceptions. There are some Indian examples. Rahul Bajaj had a partnership with Piaggio in Italy, and has a tie-up with Germany's Allianz. Baba Kalyani of Bharat Forge owns mid-size German makers of forge products. In fact, this is the best way to do it — buy smaller companies and integrate them. Big-ticket deals might not work for Indian companies. Take Corus. Tata is a great company, but Tata Steel initially had big trouble integrating Corus.

All export-oriented companies will suffer. The automotive sector is going strong now, but it will slow down. The question is what will happen to India's IT outsourcing firms. Some say that when a crisis hits, the outsourcing business will gain as companies will cut costs and outsource more. This was true for the first crisis in 1998 when a lot of companies outsourced to Wipro, Infosys and TCS. But now the second part of the crisis is different; IT companies will suffer, as there is not much room to outsource anymore. And European and US customers will cut business. But Indian pharma companies are thriving as they mostly supply to local markets. Fortunately, India is not so much dependent on exports like China.

The year 2012 will be an apocalyptic year for Europe. Things will get worse; I am extremely pessimistic. Even the Euro might fall apart. Of course, a lot of people talk about it. If Greece falls, what about countries such as Italy, Spain and Portugal? Greece is a very small country, accounting for hardly 2 per cent GDP of the whole of Europe. If Italy or Spain goes down the drain, the impact will be different. It will trawl the whole of Europe into a deep debt crisis. And the impact will be worldwide — the world could slip into a deep recession for the next few years. Needless to say, it can impact India, too.

The fall of Greece is certain. Because coming from Europe, I do not see any other way. Some austerity measures are underway now, but those are not enough. People on the streets are violent — I would not call it a civil war yet. And in European elections, the extreme parties are winning. That is dangerous.

Sitting in India, you cannot imagine how serious the crisis in Europe is. Today, when you walk into any European city, you see beggars all around. You see many young people begging on the streets all over Europe — even in Germany. People who lose jobs cannot afford their lifestyle anymore because there is no social net. I am not saying this because gloom sells, but I am convinced this will happen.

As told to T.K. Vineeth