The ‘Be Positive’ Market Mantra 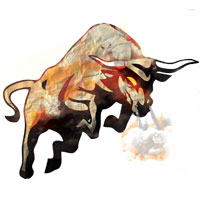 08 November, 2014
Print this article Font size -16+
For the past few days I.V. Subramaniam, chief investment officer of Quantum Advisors, is busy repositioning his firm’s portfolio by booking profits in stocks of consumer staples, while taking fresh positions in power and refinery stocks. “Last year, consumer staples helped us to make hefty gains, but today they look expensive and, therefore, we have been booking profits in some of them,” says Subramaniam, who was among the few fund managers who has been positive on the market over the past year.
The CIO maintains that the Indian market will remain positive despite global and domestic uncertainties looming over it, backed by valuations and expectations of decent growth from India Inc. In fact, fund managers such as Huzaifa Husain, head of equities at PineBridge Investments, who were sceptical about the market have also turned positive following the Centre’s reform initiatives in the past few months.
Husain feels the stock market is trading below its fair valuations and, thus, still has ample room for appreciation. The logic is simple. Usually the ratio of market capitalisation to the GDP of a country trades on a ratio of 1:1 and, currently, the Indian equity market cap is trading 25 per cent below its fair valuation. This means that at an index of 19,500, the Sensex can easily surpass 24,000.

Over the past year, the bulls were in total control due to foreign institutional investors (FII) constantly pumping in money. Till 18 December, FIIs had invested nearly $23 billion in Indian equities in the cash segment, of which $21.4 billion came through the secondary market. In contrast, domestic players stayed away from the equities market, discouraged by the lack of reform initiatives and issues related to corruption, scams and scandals.
Contrary to the FIIs, domestic mutual funds were net sellers in the Indian market, hawking equities worth Rs 20,221 crore (close to $4 billion). However, the reason for the feel-good factor making a comeback in the Indian market over the past few months has been the government’s resolve to go forward with the long-stalled reform process.
The BSE Sensex also gained close to 26 per cent, or aound 4,000 points, till 20 December, piggybacking on sustained global liquidity. During the past year, the Sensex has been consistently climbing, from a low of 15,358.02 on 2 January to a high of 19,612.18 on 11 December. The Sensex has been hovering in the 17,000-18,000 range for most of the year.
This overall positive movement in the market was across the board but the gain in bank stocks — which account for nearly 30 per cent of the Nifty — helped the index outperform the BW Experts Index (BWEI) and the BW Dartboard Index (BWDI) in 2012. The Nifty gained nearly 27 per cent, compared with a 22 per cent gain in the BWEI and 14 per cent rise in the BWDI. (See Report Card).
One of the reasons for the BWEI’s underperformance has been the impressive performance of Reliance Industries and Hindustan Unilever — both of which aren’t a part of the Experts Index.

Reliance Industries, accounting for nearly 8 per cent of the weightage on the Nifty, was up 21 per cent, while Hindustan Unilever (with 3 per cent of the weightage) was up 27 per cent. Apart from Reliance Industries and Hindustan Unilever not being a part of the BWEI, the poor performance of Infosys Technologies (down 18 per cent), Wipro (down 6 per cent), Bharti Airtel (down 9 per cent) and Jindal Steel & Power (down 5 per cent) pulled the Experts Index down. These four stocks account for 26.5 per cent weightage of the overall Experts Index.
On the other hand, Eicher Motors was the biggest gainer among the BWEI scrips. The stock in the past one year has gained 82 per cent. VST Industries (up 70 per cent), ICICI Bank (up 66 per cent), Larsen & Toubro (up 65 per cent), HDFC Bank (up 61 per cent) and Maruti Suzuki (up 61 per cent) helped the Experts Index make decent gains.
Among the experts, Saurabh Mukherjea, head of equities at Ambit Capital, recorded the highest gain of 58.5 per cent. He had picked VST Industries, Eicher Motors, Glaxosmithkline Consumer Healthcare, Oberoi Realty and Torrent Pharmaceuticals as his top five. However, these five stocks accounted for only 2 per cent of the total portfolio of the BW Experts Index. Following Mukherjea was Hrishikesh Parandekar, chief executive officer of Karvy Private Wealth who registered a gain of 45 per cent.

Parandekar’s top five picks — ICICI Bank, Coal India, Mahindra & Mahindra, ITC and Page Industries — reported positive returns and accounted for 29 per cent of the index weightage (To see the expert picks and returns, visit www.businessworld.in).
While experts are positive towards the Indian market on account of the fundamental change following the key reform initiatives undertaken by the government, factors like easing of global liquidity and commodity prices augur well for Indian equities too. Experts are anticipating a 25 basis point rate cut in January, which will help boost sentiment.
Though the overall mood looks favourable,  for the Indian market to sustain its dream run, it will require the government to take care of its ballooning fiscal deficit as well as push growth.