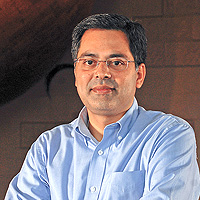 The fund had a bumpy start in January 2008. Though it initially did not catch up with the Crisil Balanced Fund index, it managed to outperform the index thereafter and attracted a healthy number of investors.

Unlike what the name suggests, balanced funds have a major inclination towards equity and a slight exposure to debt. They, by mandate, invest at least 70 per cent of their portfolio in equities, and the rest in debt and related instruments. The UTI CCP has about 85 per cent in equities and the remaining in cash. And the equity can go up to 100 per cent. The fund's purpose is to generate steady long-term capital appreciation with relatively low levels of risk, in a tax-efficient manner.

Managed by Anoop Bhaskar, head, equities of the UTI Asset Management Company, UTI CCP is a passive investment vehicle. But the returns make its performance unique. Bhaskar hasn't experimented with the portfolio much and the idea of a lower churn seems to have clicked well. "That is how it is supposed to be, because we are buying stocks for the long run rather than churning very actively," he says.
To what extent a churn is healthy is debatable. Competitors such as Reliance Regular Savings Balanced Fund (RRSBF), a close competitor to UTI CCP, have proved that churning works, too. Last year's winner in this category, RRSBF had managed to outperform the markets by maintaining a very high equity churn.

However, Bhaskar begs to differ. "You make fewer mistakes when you're not churning. Even if you have an average portfolio and don't churn, you will still do better than somebody who is above average, but takes risky decisions."
Notably, UTI CCP has high investments in large-cap stocks; that has kept the portfolio less volatile and given greater returns. As much as 73 per cent of its portfolio is in large-cap stocks such as Reliance Industries (5.26 per cent of net asset value or NAV), Infosys Technologies (4.88 per cent), HDFC (3.32 per cent) and Lupin (3.18 per cent). Recently, Manganese Ore India has been added to the portfolio. For now, Bhaskar does not want to change his portfolio mix.


But he isn't giving up growing either: he wants the AUM to be Rs 200 crore in two years, helped by low redemptions and the emotional appeal of being a children's fund. "Fresh inflows are small — Rs 2-3 crore a month — but there have been no redemptions whatsoever. I have never had to raise any cash for this purpose,"  says Bhaskar.

The fund house has maintained a cash call since October 2010; it has not invested any fresh inflows in the past three months due to a little negative stance on the market. And before you raise a brow because the fund is sitting on 20 per cent cash, Bhaskar is ahead of you. "The best way to make money is to not use it, and we have shown that to you," he laughs.