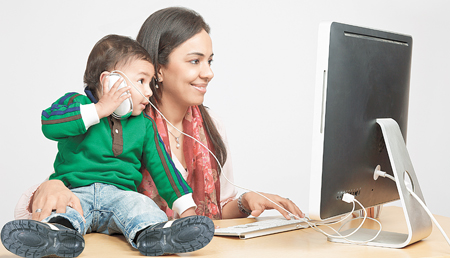 Opportunity Knocks
Singhdeo was in her late pregnancy when she realised that going out shopping for herself and her yet-to-be-born baby was tough. "It was then that I realised that I could start a kids' online retail portal," says Singhdeo, who founded babyoye.com a couple of years ago. Around that time, a lot was happening in the organised kids' retail market. While international brands such as Mothercare and Chicco had made a foray into India, Mahindra owned Mom & Me stores were gaining a foothold. Even older players such as Gini & Jony and Lilliput were on an expansion spree. She realised it was the right time to go online. She quit her job with Naukri.com and started Babyoye.com which is registered under the name of Mom Supplies.

Along with her husband, she did some research through Babycentre, an R&D division of Johnson & Johnson. The research results showed that 20 per cent of the people who shopped for baby products chose the online route in the growing Indian e-tail market. That was enough encouragement for Singhdeo. She started catering to new parents from a 400 sq ft room near Mumbai's Khar station that stored just 800 products across categories, sourced from nearby stores. Now, her company has over 15,000 products stored in three warehouses. She has a tie-up with 120 brands and works with 200 vendors. "I still remember our first order — a packet of diapers we sold to a parent in Delhi. We sourced it from a nearby store," she says. She also recalls her first failure: a customer booked and cancelled a stroller worth Rs 5,000 as she had got a better deal elsewhere. "We quickly learnt to rework our logistics and offer better deals," adds she. The company received its first investment of $4 million in two tranches from Accel Partners and Tiger Global in January 2011.

Even seasoned retailers are jumping on to the online bandwagon. Jagat Bakeri, for instance, has had kids' retail stores for over 14 years. "Back then I would supply apparel and other baby products to some top retailers in the country," says Jagat Bakeri, founder of kidstudiostore.com. Now many big retailers such as Shoppers Stop, Pantaloon and Lifestyle have their own kids division. Earlier they used to source their products from Bakeri who now runs three stores in Ahmedabad. The online business was set up as he already had the back-end tied up and online presence gave him the opportunity to expand his business across India. "I persisted with my website because when it opened in 2009, my sales reached Rs 4 lakh in just one month. It is too big an amount to be ignored in business," he says. He adds that a lot of NRIs shop online for their kids and the phenomena is picking up in the Indian market as well. "Today online retailing has penetrated top 20 cities in India," he says.

Bangalore-based hoopos.com is also betting big on the kids' e-tailing segment. "We got into this business because we can reach out to many more customers than just being dependent on catchments of suburbs," says Vijay Jumani, co-founder of hoopos.com which was set up just over a year ago. Jumani already owns a chain of kids' stores called ‘Apple of my I' in Bangalore.

The other co-founders of hoopos.com are Jumani's wife Radhika Jumani, Raveen Sastry and Anubhav Sudha. The latter two had worked in various corporate jobs in the technology  field before partnering with Jumani. Helion Venture Capital has invested an undisclosed sum in hoopos.com. "Data suggests that online retailing in the kids segment can be a profitable business," says Ashish Gupta, senior managing director of Helion Advisors. While the founders are hesitant of disclosing the investment in the business, they say they offer 8,000 products online for kids between the ages 0-15. Hoopos plans to earn one crore in revenues by the end  of the year.
break-page-break
While babyoye.com and hoopos.com have been around for over a year and have received some VC funding, there are others that have started recently and are hopeful of grabbing a piece of the pie. Take pinehill.co.in, for instance, which was started by Venkatesh Madhava five months ago. When Madhava returned to his hometown Chennai in 2010 after having worked in a kid's retail outfit in Australia, he realised that while Indian mothers spent a lot of money on their kids, they disliked going to the market frequently to purchase just a shirt or a dress for their child. He figured that an e-commerce website dedicated to the ages 0 to 8 with detailed product descriptions would most likely attract traction.

One of the biggest drawbacks of purchasing something online is that you are never sure of the size. Madhava solved the size puzzle by creating an online size measurement system that helped mothers decide whether their kids would fit into a particular garment or not. The website currently caters only to parents living in Tamil Nadu but has plans to go national once it has perfected its delivery model. "Our strength is in designing our own merchandise. It is all inhouse and we have vendors who manufacture as per our specifications," says Venkatesh Madhava, managing director of pinehill.co.in that keeps 100 per cent private labels, which enables it to have margins as high as 90 per cent in comparison to other sites where private labels comprise only 5 per cent of the total merchandise.

Then there is Amurto Basuray, who worked abroad in retail outfits for over 10 years. He returned to India intending to become a franchisee of kidswear store Chicco. However, he realised there was a huge opportunity in setting up an online store that would cut across brands and cover a whole range of products and babeezworld.com was born last year.

"Engagement is the key in online retailing," says Basuray, founder of Delhi-based babeezworld.com. The website has a baby gift registry, where expecting mothers can put up their wish list on the website and friends and relatives can later buy these products from the website for the newborn. "The website offers a lot of flexibility in engaging customers than running a brick and mortar business," says Basuray. He has invested Rs 1.5 crore in the business. His website offers 1,500 products starting from diapers to toys to apparels and other products.

What Works?
So what makes e-commerce websites click at a time when brick and mortar companies such as Lilliput and Giny & Jony are facing financial troubles? Simply put, the margins are higher. The online business generates 25-30 per cent gross margins, compared to 15 per cent that brick and mortar businesses enjoy. The huge margins exist because of two reasons. One is that the kids e-tailing industry is still in its infancy and the little competition has, so far, not eroded the wide profit margins. Second, while buying goods for kids, parents prefer the best products, even if they are slighly expensive. "The advantages are that you do not pay any rent and staff costs are only a third of what you will pay if you ran a front end," says Pinaki Ranjan Mishra, national leader of retail and consumer products practice at Ernst and Young.

The key to enjoying higher margins even while selling products at a discount is in logistics and delivery. For online retail to succeed you need to have a no-questions-asked return and exchange policy. That's the only way consumers feel confident of purchasing online. And for all this to become possible, it is important to have a local set up in each city and a good delivery partner.

An e-commerce website needs at least 5,000 hits a month with an average purchase of Rs 250 per order to generate revenues amounting to Rs 1 crore a year. "Repeat customers are the key," says Gupta of Helion Advisors. And repeat customers come only if there is a large variety of products available on the site.

However, these sites are too new to realise what sells and what doesn't. Typically, a website faces losses for at least three years and requires at least Rs 10 lakh each year (for working capital and stock) to sustain the losses before it starts to stock what sells and turns profitable. The Chinese company redbaby.com.cn and US-based gymboree.com are some of the multi-million dollar websites that Indian brands aspire to become. What works in their favour is that 60 per cent Indians are below 35 years of age who are  likely to become parents in the near future. E-commerce could just change the way we shop for kids' products, especially after it has changed the way we shop for books and other entertainment. "But the question arises if these strong local websites can ever become national players such as Flipkart," says E&Y's Mishra.