The Art Of Faking It 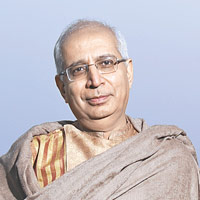 08 November, 2014
Print this article Font size -16+
Aspirational spending collapsed like a pricked balloon in 2012, and the excesses of the good life seem to have gone into a tailspin. How you reconcile your straitened means with the luxury economy will depend on your chutzpah in passing off the neighbourhood shack food as gourmet delights, and pasting pictures on Facebook while posing beside a yacht, or checking out a Birkin, without the unnecessary information that it isn’t yours. (You’re not lying, just not telling the whole truth). Here are five trends that will help you triumph in 2013 without having to break the bank.

Invent A Past
It has been the hottest trend among a few select nouveau-riche because what Old Money commands, New Money cannot match. Families have invested in creating histories for themselves — an aristocratic past, a crumbling “haveli that must be restored” and “family heirlooms” that have been bought at auctions or antique shops.

Everything from photographs of unknown but splendidly dressed up chieftains from some little-known  thikana to Baccarat  lamps, threadbare carpets, even old sarees or jackets from which you can have the zardozi transferred to new garments because “it’s from my great-grandfather’s family, who was a Rai Bahadur…” Photoshop pictures with some more treasures and you will end up exuding mystery — and there is nothing more appealing than a destitute royal.

You will even be forgiven for being middle-class as long as you can give your shabby chic a sense of nostalgia. But if you don’t want your chicanery found out at the Page 3 party, locate the geography in the deepest interior of the country and be vague about details.

Do Bespoke
Fake brands can be smelt a mile away by the cognoscenti, so don’t even think of those pavement bargains from Bangkok (or China, or Italy, or downtown Bandra). And if you’re opting to hire your bags and shoes, your gowns or suits, wallets and watches, hostesses will tell you with a wicked gleam in their eye that the accessory you’re sporting from an online or physical rent-a-brand for a sixth of the price of the original was worn by Celebrity X at a fundraiser one week, and by Wannabe Y the next. You might want to consider saving up for the occasional bag, or watch, but where clothes are concerned, find a good tailor and put up with the attitude and delays (most good tailors now behave like designers, though at a fraction of the price) because design rip-offs just aren’t as good as originals that you can truthfully claim as bespoke.

Remember to keep your mouth zipped instead of revealing your source in a moment of drunken revelry. Everyone knows that the true-blue believe in having their clothes and shoes done to measure, shunning couture or designer casuals that come off the shelf.

Flaunt Your Wheels
Nothing marks you as much as the car you drive, and if all you have is a mid-range sedan, you can be sure that you’ll never move with the big boys who love their toys. Which is why you could do no better than to pick up a second-hand Merc, or Beamer, at the same price, because eventually it’s the automobile, not its age or model, that will get you noticed. Don’t believe me? Check out the body language of the valets you give your car to at a hotel. If your other car is a simple Suzuki, or Honda, you can be sure it won’t matter, as long as you’re part of the high-wheeler club on party night.

Sign Up
You need a sorority group or kitchen club that you can be part of — no matter how much it costs. A kitty that has the city’s who’s who, a gym or health club where the big guns come to sweat it out, salsa classes, ikebana meetings, biker gangs, film groups, travel communities, a Rotary or Lion’s, even industry outfits like CII or other equivalents. Think of the gains of name-dropping without fear of being caught out on the rebound: “I really loved the jacket Anand Mahindra was wearing last night” or “Told Chidambaram I thought his speech yesterday didn’t carry much weight”. Creates an intimacy with the high and mighty which might not exist at all, but which the listener is led to believe.

Become An Activist
It is the fastest way of getting noticed. But don’t just join the queue, use your contacts and get on to television — and see how fast you become part of the intellectual set. But do have coherent views and the ability to glib-talk. If you actually have suggestions, or solutions, that’s a bonus. If you’re on television at prime time, you’re a celebrity. And these days, instant celebrity-hood means you get your share of 15 minutes of fame with someone else willing to pay for your favourite sundowner — single malt, naturally.

It all boils down to having a lifestyle, even if you don’t have the moolah for it.

The author is a columnist on art and lifestyle, and works extensively on books across a range of interests