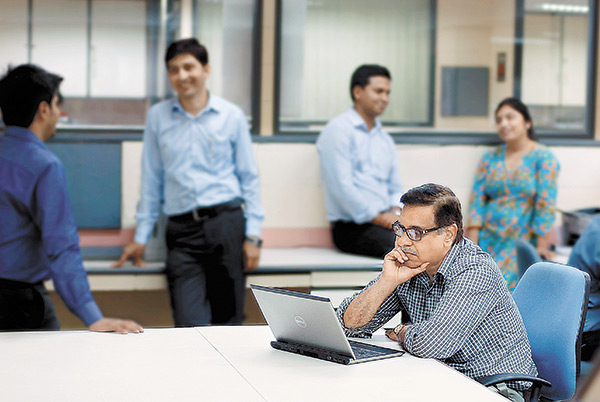 08 November, 2014
Print this article Font size -16+
Akash Saxena (not his real name) agrees to talk on the condition that he, and the company he works for, will not be named in this article. This is because Saxena feels that it is the issue that deserves attention and not any particular company. The 48-year-old recently completed two decades with a leading consumer goods multinational in India and has a good decade to go before retirement. “Though it was not my first job, I always thought this would be the organisation that I would retire from. But what’s been happening over the last few years has been extremely demotivating for me and my peers in this organisation,” he says.

The FMCG major gets MBA graduates from top-rung management institutes into the system to perform jobs that Saxena and his peers managed to do well without an MBA. These B-school graduates, with little or no experience, start as assistant managers (1D grade in the company), bypassing several senior hands who have progressed from staff level, through officer grade 1A to 1C.

“The cap on employee performance assessment also makes our progression even harder. If one person in a department gets four stars, the HR department sets a cap that requires the other person to be given two stars even if he has performed well enough to earn a three-star rating. Biased managers dole out more stars to younger employees and, naturally, the older lot ends up on the losing side,” says Saxena, in whose department more than 40 per cent employees are on the wrong side of 40.

Disparity over pay is another issue. People who have just come in as freshers enter at 1C and 1D and get
Rs 9-12 lakh per annum. “We are in a much lower bracket despite the experience we bring to the job,” he laments. Adding insult to injury is the double-standards in offering employees medical benefits. In branch offices, all employees above 40 get a free medical check-up. But in the head office, those who are below the 1C grade do not get a free medical check-up. And the limit on medical reimbursements is lower for employees who are in the lower grade. “Do younger employees in the managerial cadre deserve medical benefits any more than older employees in the officer cadre,” asks Saxena.

Some term Saxena’s experience as the usual rant of an older employee who has developed a persecution complex towards everything that happens in the organisation he works for. Others see it as ageism — discriminating against employees on the basis of age.

As the average age of India’s workforce keeps dropping, older employees face the threat of being left out in the cold. This is especially true for those who are pushing 50 and have a decade or so to go before they retire. That problem threatens to get worse over time. With average lifespans increasing, many employees are getting job extensions even after they cross the stipulated retirement age.

At the same time, organisations are hiring youngsters by the hordes to fuel their growth ambitions. This could, at the very least, lead to a culture clash and, at its worst, hamper employee productivity, create a deep sense of insecurity and divide the organisation right down the middle.

And, as employees from diverse age profiles cohabit the workplace, are organisations doing what it takes to ensure that ageism does not become a real threat in India? “Companies have been speaking about gender diversity and making the workplace friendly for people with disabilities. But I have not heard of age diversity being spoken about in the same breath,” says Tulika Tripathi, managing director of recruitment consultancy Michael Page India.

One could argue that it is so because there is no compelling reason or any incentive from the government to make the workplace an inclusive set-up for older employees. India does not even have an anti-age discrimination law in place.

Compare that to companies operating in countries such as Singapore. They actively look at age diversity because of the rebates they get from the government in terms of employer contributions towards the provident fund of senior employees and so on.
break-page-break
Consequently, most companies in India do not have a code of ethics geared towards preventing ageism at the workplace. Some years ago, beverages giant Coca-Cola was in the news for having instituted a well-thought-out strategy in the UK to put in place anti-ageism policies even before the age discrimination laws came into force. Since early 2006, Coca-Cola saw a 12 per cent increase in new starters, over the age of 40, joining the company.

Contrast that with the ground reality in India. There are many companies who speak (off the record) about how their organisations strictly follow the hiring-under-40 rule. “Even if I was God, I cannot be a regional sales manager for this company at 51 years. A frontline sales person has to be less than 28 years old, area manager below 33, regional manager below 37. Even for a national sales head the outer limit is 42 years. Exceptions come in, but it’s rare,” says the CEO of a consumer durables company.

According to the Indian Labour Market Report published by the Adecco-TISS Labour Market Research Initiative (ATLMRI), from 2010-2030, the proportion of the Indian population in the age group of 60 and above is expected to increase sharply from 7.5 per cent to 12.4 per cent.

A large part of this group is currently part of the working population and the ageing of this group may generate a set of challenges and opportunities in markets — particularly the labour market, says the study.

But organisations do not seem to be unduly concerned about a large number of executives retiring within a short span of time, as supply is in abundance. A case in point: a couple of months ago, State Bank of India received 1.7 million applications for the 1,500 officer positions that were vacant. That is one more point that goes against the older employees in an organisation.

Visualise the scenario of older employees in any organisation. Two things have happened. Either a good number of them have done well in their career, moved up to senior management cadre and have, naturally, been taken care of by the company. Or, there are those who have stagnated — some out of choice, because they worked for job security and not with ambition in their formative years.

These employees are mostly in the officer grade. “These employees have reconciled to the fact that they will not grow further. Their mobility has reduced because they cannot take up assignments that involve a change of location. So they are only looking at job stability and nothing more,” says E. Balaji, former MD and CEO at recruitment firm Randstad India.

This is also one of the reasons why companies in India do not have special programmes to upgrade the skills of this set of employees — especially since technology has changed the face of many a workplace. “There is no need to ring-fence this workforce as they have nowhere to go,” says Balaji.

At one level, organisations are possibly doing what is best suited for their business by putting their resources behind the young — human resource experts believe that productivity among older employees typically peaks in their early 40s and might stay level, at best, for the rest of their professional life, but there is every risk of that productivity taking a dip as the employee gets older. Contrast that with the salary of the employee — wages can stay at the same level or go higher, which might work at odds with the organisation’s objectives.

But at another level, they might be attracting the energy of the young, but not capitalising on the experience of the old. “It boils down to whether companies have efficient knowledge management systems to capture the tacit knowledge of the older employees, convert it into explicit knowledge and pass it on,” says Nishchae Suri, partner and head of people and change practice at KPMG.

Others argue in favour of being compassionate and sensitive towards every segment of one’s workforce. Of course, that means getting the basics right. For instance, Coca-Cola did away with even using ageist and discriminatory language in its recruitment ads like “young graduates can apply”.

Prithvi Shergill, chief human resources officer at HCL Technologies, says that all good organisations evolve people practices to suit all categories of the workforce. “The generational conflict is overstated,” he says and adds that workforce segmentation helps an organisation deliver what different sets of employees need — the needs of a 45-year-old employee could be radically different from those of a 25-year-old.