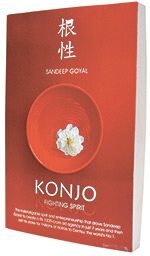 08 November, 2014
Print this article Font size -16+
Konjo is a well-written, first hand account of Sandeep Goyal, a fire brand advertising guru with guts, grit and determination. Goyal is a person who looks for opportunities where none exist and delivers on promises. Some time in 2005, I had the opportunity of witnessing this. Being from the same alma mater, FMS, he called me, showing his interest in NIIT’s ad campaign, knowing well we had not invited Dentsu and were on the verge of making a choice. And in just a day and a half, he presented a campaign, including a televised placement show and online capsules. Once he makes up his mind, he has his way — that’s the indefatigable spirit of Goyal.

Konjo, meaning fighting spirit in Japanese, a trait which Goyal exceedingly displays throughout his career, is a racy account of professional life. The book charts his journey since the setting up of a joint venture with the world’s largest ad agency, Dentsu, its meteoric rise to a Rs 1,200-crore-a-year agency and his exit a few years later for a hefty gain.

Goyal’s stories  show how his team worked with brands like Toyota, Honda and Canon under his leadership. Konjo has 50 exhilarating well-crafted chapters. Goyal’s stories are full of detail — expressions, words and emotions — and bring out the perseverance, tenacity and stamina of his numerous trusted colleagues and industry friends.

I am most impressed with the resourcefulness of Ruchika Raina and the integrity or the lack of it of D. Rajappa who rejects Sandeep’s repeated requests to meet his Dentsu boss for an interview. Each chapter brings out his inimitable style and brilliance in letting his team of Gullu Sen, Rajesh Agarwal and Ruchika deliver. Goyal also tells the stories behind hard-hitting campaigns, including the Save The Tiger campaign for Aircel and Tata’s Century of Trust campaign.
My takeaways from this book:

One, you miss 100 per cent of the shots you don’t take. And two, ask yourself every morning: When was the last time when you did something for the first time?