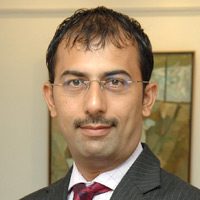 Dhawal Dalal, executive vice-president and head, fixed Income at DSP BlackRock Investment Managers, was sitting on 50 per cent on cash in its government securities (G-Sec) portfolio ahead of the monetary policy. “We were underweight and were lighter on our G-Sec assets", says Dalal. Talking to Businessworld, he says in the current market situation, one can't take a view beyond 1-2 months. That is why he has been investing in papers with 2-5 years maturity which can capture a price appreciation when interest rates decline and at the same time mitigate the risk of widening of credit spreads.

He feels it is worrisome when downgrades are more than upgrades and one has to be very cautious about picking up the right paper. Concerned over the health of banks, he has also been searching for alternatives for certificate of deposits (CDs) and has been investing in commercial papers (CPs). Meanwhile, based on supply-demand dynamics and near-term pressure on inflation, he believes that G-Sec bond yields are likely to remain higher in the near-term – and go up to 8.40 per cent – before trending down in the second-half of the year.

Excerpts from the conversation:
Most of the market was hoping Reserve Bank of India would cut interest rates. Was no rate cut a disappointment and why?
Surprisingly, this time, there was almost unanimity on no rate cut as the Reserve Bank of India (RBI) had clearly articulated the criteria for a rate cut in their June credit policy. Also, in the run-up to the policy in July, they were quite vocal about risks from inflation and need to contain fiscal deficit. Based on that, a majority of market participants expected the RBI to keep interest rates unchanged in their July policy. At the same time, there was a section of analysts who thought the RBI may participate in the coordinated action by various central banks which have reduced interest rates in their respective economies and therefore were expecting an interest rate cut in India as well.


With no rate cuts do you see market still struggling for liquidity? When do you think the RBI will start cutting rates and why?
Systemic liquidity is likely to improve gradually from here as declining credit off-take, government spending and likelihood of open market operation (OMO) bond purchases starting second-half of the year may generally contribute to improvement in the systemic liquidity. At the same time, market participants are cognizant of the fact that systemic liquidity could be adversely affected if there is a sudden FII outflow  in case India’s sovereign credit rating is downgraded. Given, the RBI’s own projection of inflation this year and the prospects of suitable government steps to contain fiscal deficit, we believe that the RBI could look to reduce interest rates in the last quarter of 2012.


Are these testing times for the Indian economy and market and why? When do you think we can see recovery?
If one looks in the past, Indian economy has been able to cope with higher inflationary pressures so long as it was growing above trend-line. Same was the case for higher fiscal deficit. In the current scenario, our economy is facing a series of challenges from both external front as well internal front. These challenges have culminated in a dramatic slowdown of our economic growth. Higher commodity prices, weak currency and severe pressure on fiscal deficit has aggravated the situation. These market conditions are similar to what economists describe as stagflation (stagnant growth accompanied by higher inflation). Economists believe that stagflation-like conditions can be dealt with a combination of effective economic policies to promote growth, which is the government’s prerogative, and an environment of easy liquidity, which is the RBI’s prerogative. We believe that the government is poised to take suitable actions to spur economic growth. At the same time, the RBI is ready to reciprocate. Therefore, we remain cautiously optimistic on the prospects of economic recovery.

As a fund manager how are you managing the money in your portfolio and where are you investing in this market? In the current market condition, where will you advise investors to invest?
With RBI’s interest rate hiking cycle over, we expect a gradual decline in interest rates in India. Therefore, fixed income fund managers are looking to increase duration in their portfolios.

At the same time, we are aware that credit environment is steadily deteriorating in India. Credit rating agencies have announced more downgrades in India this year-to-date than upgrades. We expect this situation to last for a while before things stabilise after some time. Moreover, current credit spreads are relatively tight for the existing credit environment. We expect these spreads to widen gradually from their current levels. Based on these factors, we are looking to invest in high credit quality & relatively liquid assets maturing in 2-5 year tenor. This portfolio strategy is aimed at capturing a possible price appreciation in the fixed income assets when interest rates decline and at the same time aimed at mitigating the risk of widening of credit spreads.

What is your take on 1 year, 2 years, 3 years, 5 years and 10 years yield in corporate bonds? Will you be a buyer in corporate bonds and what would be the tenor?
The current term structure of interest rates for corporate bonds is a bit flattish. The spread between current 1 year & 10 years AAA PSU bonds is around 30 basis points as against a long-term average of 70 basis points. We expect the yield curve to gradually steepen as short-term yields are likely to fall in line with possible reduction in interest rates by the RBI. Also, interest rate cycles in India have shortened to around 3 years.  That means time period from two interest rate peaks is around 3 years. From all these perspectives, we believe it makes sense to consider investing in 2-3 year AAA rated high quality liquid assets in the portfolio.