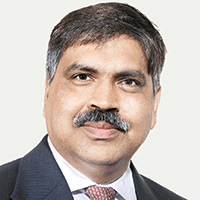 08 November, 2014
Print this article Font size -16+
With a study suggesting over a hundred dollar billionaires in India by assets and stock market value, and more than 150,000 dollar millionaires, the ranks of the rich in our country are only expanding. There are two types of wealthy — the self-made, first-generation rich, and the inheritors. These two categories differ so much in their attitude to wealth that it would be wrong to bucket them together.

Let’s first look at the self-made, first-generation wealthy. Often, these business leaders are a by-product of various hardships witnessed and challenges overcome over time, which has made them confident of their success through the unique strengths which have evolved over time. They follow a certain value system, leadership style, and a management practice that is unique to them. Once they are successful, and create a significant amount of wealth, the key challenge they often face is the continuity of their success, both from the perspective of management succession as well as ownership succession. Their next generation may not be that passionate about the business, or may not follow the mantra of success that the founder would like.

The most difficult question is ownership succession, which often results in sibling rivalry or partnerships, and the ensuing challenges around it. However, when one speaks to the founders of first-generation enterprises, they will tell you that their biggest challenge is the succession of values, which made the founder so successful and impactful. They often struggle to ensure that the values they have inculcated in their businesses endure over generations to come.

For wealth inheritors, on the other hand, there is an opportunity as well as a challenge to overcome. While there is an opportunity to build further from where the previous generation left off, the challenge is to build their own identity outside the shadow of previous generations. Increasingly, you find the next generation looking to create a business outside the family business, just to prove their identity, leadership and business style. They often face an equal challenge in retaining and growing the professional talent in their companies, as they are seen to be competing with their own senior managers in the business. More importantly, they are a by-product of their education, which is, more often than not, the best of universities (often abroad), and which may, at times, follow a different path to success than what was adopted by their previous generation. They often struggle to strike a balance between the two approaches, not knowing what’s best for them. The wealth inheritors often find it difficult to transmit the values of the family to the next generation, as they themselves may not be seen to be following the family values as closely as they are supposed to and, thereby, they often become an ineffective carrier of family values.

This has led to a general belief that, more often than not, the business and the family wealth gets destroyed beyond the second generation. Globally, it is said that more than 85 per cent of business families are not able to retain or build on success beyond the third generation.

What is common between the two sets of the super rich mentioned above is the challenge they face in transmitting family values, which they feel is core to their continued success. In our business, we deal with a large number of business families, including the Top 100 families in the country, and wherever we have a deeper conversation with the head of the family, he often talks about the challenge of continued success, while transitioning from one
generation to another.

Adopting some of the best practices in management and ownership succession is key to continued success. In our experience, families do look for the right structure for this transition to happen smoothly. They are often looking at setting up family holding trusts, family constitutions, family boards, or a combination of various such formal and/or informal structures.

Indian families are increasingly becoming global, and they have been adopting some of the best practices on these issues. The family trust structure is increasingly being looked at to take care of ownership problems. What is critical is to imbibe the message of continuity of family values, besides imbibing philanthropic pursuits.

Philanthropic practices have evolved over time, and we are now seeing families act as catalysts of social initiatives through social impact investments, which bring about a blend of the best business practices and philanthropic impact. We have seen families increasingly looking for investment in social impact space, that is, businesses that are both viable and sustainable, but focused on bringing significant social change in areas such as education, healthcare, rural livelihood, etc.

Given the identity struggle that the next generation is often faced with, they are increasingly looking at setting up new businesses outside their family business to prove their managerial skills before they get inducted into the family business. This has led to an increasing trend of building a business on their own in some new-age areas. This helps them to expand their horizons outside the family business but, more importantly, gives them first-hand experience of building a business. This also helps to fine-tune their leadership and management style before they apply it to the larger business they are inheriting. We have also seen families now providing early stage (seed, angel investment), or growth stage (venture capital or private equity investments) capital to businesses outside their family business to pursue their strategic or family diversification needs.

Last, but not the least, in a significant shift from past generations, business families today do everything possible to help Generation-Next succeed in not only growing the family business, but also in creating their  business (lets them play both Brahma and Vishnu).