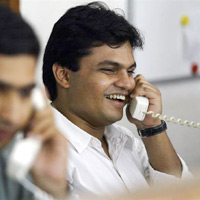 08 November, 2014
Print this article Font size -16+
The government has asked telecom operators to pay the first installment of Rs 8,115.68 crore of one-time spectrum fee by January 15, sources said. If telecom operators opt to make payment in installments, then first installment of all companies will be little over Rs. 8,000 crore which they will have to pay by January 15, a government source said.
Sources said that the first installment for Vodafone amounts to around Rs. 2,093 crore, Airtel's Rs. 1,758 crore, BSNL's Rs. 1,282.98 crore and MTNL's Rs. 916 crore. The same of Idea Cellular is Rs. 810 crore (includes Rs. 84.45 crore of Spice Communications), Aircel's Rs. 584 crore (includes Rs. 1.98 core of Dishnet), Loop Mobile's Rs. 607 crore and for Reliance Communications' about Rs. 63 crore. When contacted Bharti Airtel and RCom declined to comment on the issue, while no immediate comment could be received from other operators.
The Director General of GSM players body COAI, Rajan Mathews said their "members are evaluating legal options and may approach court over the issue". Initially, telecom firms were given 4.4 MHz spectrum along with licence for Rs. 1,658 crore for pan-India operations and later they were entitled to get another 1.8 MHz on fulfilment of certain subscriber-base criteria. In November, the government decided that the operators should pay for holding spectrum above 6.2 MHz retrospectively, from July 2008 to January 1, 2013.
After that, for spectrum above 4.4 MHz, they would have to pay for the remaining period of their licences based on auction held last November. As per this decision, DoT issued demand notice to telecom operators on January 9. The government is likely to get Rs. 4,251.83 crore from retrospective charges, and Rs. 18,925.82 from prospective charges for excess radio waves held by mobile operators.
In all, around Rs. 23,177 crore is expected from levy of one-time spectrum fee, sources added. State-owned BSNL will have to pay around Rs. 6,912 crore, followed by Bharti Airtel - Rs. 5,201 crore, Vodafone - Rs. 3,599 crore, MTNL - Rs. 3,205 crore, Idea Cellular - Rs. 2,113 crore (includes Rs. 231.5 crore of Spice), Aircel - Rs. 1,365 crore (includes Rs. 14 crore of Dishnet), Loop Mobile - Rs. 606 crore and Reliance Communications - Rs. 173 crore.
Sources said the Department of Telecom (DoT) has tentatively fixed provisional rate for spectrum in 1800 Mhz band for Delhi, Mumbai, Rajasthan and Karnataka circles where it did not receive any bids, as also for the more efficient 900 MHz band. Telecom operators have been asked to pay the amount in equal annual installments for the balance number of years of licence in a manner that the last installment is paid a year before the expiry of company's licences.
The government has given option to telecom operators who are not willing to pay the one-time fee to surrender their additional and excess spectrum.