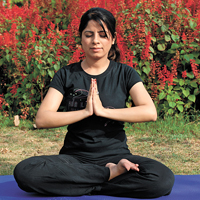 Have you heard the phrase anxiolytic medication? Even if you have not, you may, at one time, have been prescribed one. Diazepam, an anxiolytic drug, is among the essential drugs list of the World Health Organization. It is also one of the most prescribed drugs. Anxiolytics are used for reducing anxiety. A large number of them, including diazepam, work by increasing the effect of a neurotransmitter in the brain called gamma-aminobutyric acid or GABA. It is one of the major neurotransmitters in the brain. If you make more GABA in your brain, you feel less stressed. It could also be important in several other tissues, but its effect on mood is well documented.

There are several foods that are supposed to enhance GABA levels in the brain. Many of them such as broccoli, almonds and green tea contain an amino acid called L-theanine. Food supplements with this amino acid are also supposed to improve GABA levels. However, yoga boosts it substantially. The current study was aimed at comparing yoga and walking, but an earlier study by the same institution had found a 27 per cent increase in GABA levels after an hour of yoga. It may be time to get rid of those anxiety medications and concentrate on diet and yoga.

Fuel Cells On Your Rooftop

Producing electricity at a central location and distributing it everywhere is one of the least efficient ways of using it. By the time electricity reaches your home, you have already lost 40 per cent of it. However, technology and economics do not allow us to generate and use power off the grid on a large scale. Now a researcher at the Massachusetts Institute of Technology (MIT) has made some crucial breakthroughs that may make it possible.

Scientists and engineers think fuel cells are best suited for distributed energy generation. A fuel cell splits water into hydrogen and oxygen through electrolysis using an energy source like sunlight. We can store them separately, and combine them when needed to generate power.

It is important for the energy source to be renewable and carbon neutral for the fuel cell to be eco-friendly. Fuel cells use two separate catalysts in the electrodes to generate oxygen and hydrogen. Current catalysts that produce oxygen are slow and expensive, which is why we do not find fuel cells on our rooftops.

Daniel Nocera, professor of chemistry at MIT, announced at a meeting of American Chemical Society this week that he had developed catalysts that are 200 per cent more efficient than existing ones. They are also cheap and non-toxic to make.

A fuel cell using them could reduce the price of electrolysers by half while improving efficiency. Nocera also claims to have developed a method to use water from rivers and oceans in these electrolysers. He has also floated a firm, Sun Catalytix, to commercialise this technology. Nocera expects to sell these devices to villages in India and Africa. Having said that, commercialisation is always the most difficult part of renewable energy development.