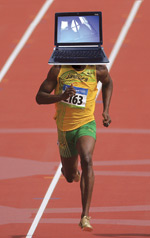 On A Speedy Track
It is a piece of news that is seven years old. Yet, it remains current and significant. The IEEE, a professional body that oversees Wi-Fi standards, finally ratified the 802.11n standard for Wi-Fi — seven years after it drew up the draft standard, and after several million people bought equipment using that standard. Yet, it is a significant development; not least because the discussions are finally over. It would certainly lead to faster Wi-Fi in the future, as all the changes to the draft are related to speeding up the data streams.

The large majority of current Wi-Fi equipment uses the standard 802.11b and 802.11g. A few older wireless routers use 802.11a, but these standards are not fast enough for future networking needs. 802.11b can support bandwidth up to 11 mbps and 802.11g can support 54 mbps. Current 802.11n standards can support up to 300 mpbs, while the new 802.11n can support up to 450 mbps. Discussions are already on to take the Wi-Fi standard to gigabyte speeds. Users of 802.11n need not worry. Future equipment will be compatible with those of today.

Group Insurance
To stay fit, exercise and healthy diet are must. Now there is a new dimension to being healthy: being part of a social group. Scientists at the University of Exeter say that being part of a social group is even more important than diet and exercise for maintaining good health. Their advice is published in the magazine Scientific American Mind. The authors say several studies had shown a link between memberships in social groups and physical and mental health. A study last year showed stroke victims recovered fast when they were part of a social group. Another one, to be published in Ageing and Society, of new residents in old-age homes said those who took part in group decisions were happier. A third research, under review in Psychology and Aging, says those who took part in a reminiscence group improved their memory by 12 per cent. Citing more such examples to be published soon, the authors say that participating in group activities is cheaper and as effective as many medications.

Flip Online
Newspapers may be dying, but is the internet ready to provide a good alternative? It is still difficult to surf newspapers online. Part of the reason is webpages load slowly, whereas one can quickly read a hard copy in hand. Google's new service, Fast Flip, addresses this problem. It even provides some revenue to beleaguered newspaper publishers. The beta version of Fast Flip was launched last week.

Fast Flip is supposed to combine the best in print and digital. The application provides constantly searchable content that users can share. The pages can be browsed quickly, just like a physical newspaper. Fast flip also tries to personalise the newspaper by choosing to give content that users like. For this, Google has partnered with 36 top publishers, who will share the revenue from the ads on the site. The search giant has provided a version for Android (its mobile operating system) phones and the iPhone.