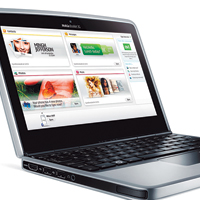 A Smart Choice
No one knows what internet device will dominate in the future. Hence, it probably makes sense to have your fingers in many pies. Computer manufacturers such as Lenovo, Apple, HP and Dell are entering the smart phone market, and thus it makes sense for phone-makers to enter the computer market. Cell phone giant Nokia has announced the launch of its booklet PC — a small netbook-like device that could be used for all wireless data applications. Nokia thinks many smart phone users are unhappy with its small size and would like to have a larger screen for applications such as global positioning system (GPS) and video chat. The new Nokia 3G booklet would be 3G-ready, and boasts of capabilities for fast downloading. Basically, it is a PC designed to work like a mobile phone. Users can watch GPS maps, high-definition video or run any PC application on it. The tiny device would come bundled with Nokia's service Ovi, which provides maps, music, messaging and games. It would sync easily with Nokia phones as well. The service is not yet available in the US, India or China. So, the question before users is: would you prefer a small PC-phone to a smart phone?

Multitasking Muddles Brain
Doing a variety of things at the same time may look like a necessary condition for success in today's world. But people are better off doing their tasks in linear order, one after the other, according to researchers from Stanford University in the US.

Those who regularly multitask only think they are smart. Their brains constantly wander away, and they are not able to concentrate, remember things well or switch from one task to the other, when compared to those who do not multitask often. The findings are published in the journal Proceedings of the National Academy of Sciences.

Grabbing Eyeballs
Those blinded by retinal disease have long been waiting for the day when a scientist could make a spare retina from their own cells. Now, a few American scientists have succeeded in growing retinal cells from two types of stem cells. Though there is still some way to go before you could make retinal cells from your skin cells, the research is useful in other ways too. The freshly grown retina is useful to test new drugs for retinal diseases, particularly genetically-linked diseases. The work was performed by a team from the University of Wisconsin School of Medicine and Public Health, Madison.

A retinal cell is a highly specialised cell. The new experiment is a significant advance because the retina created was very different from the stem cells used to make them, and yet the work was done in a dish, not inside a live organism. The scientists had taken cells from the skin, turned them into stem cells, and grew them into retinal cells. Scientists are expected to use the method immediately to test drugs for retinal diseases, but more work is required to make a retina for transplant.