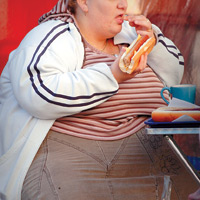 Fat is bad; but how bad is it really? Long-term intake of a high fat diet makes one put on weight and clogs the arteries, apart from causing a slow mental decline. What about binges during a short holiday? Bad, again. Human body processes fat in complex ways, and so far scientists had not known clearly the effects of eating a high-fat diet in the short term. Now they know. Just nine days are enough to slow down your brain and reduce physical endurance, shows research from the Oxford university.

A high-fat diet (up to 55 per cent fat) is common among people who eat a lot of junk food. Scientists at Oxford had used such diets on rats and tested their endurance and mental abilities. Within nine days, the physical endurance of rats reduced by 50 per cent, and they began to make more mistakes on maze tests. Scientists have also figured out the molecular basis of this reduction. The hearts of these rats also increased in size. Now, this group is doing tests on humans, and they will not be surprised to see humans responding in similar ways.

There is a third criterion as well: the material needs to bind hydrogen once again without the use of too much energy. Now, scientists at the Los Alamos National Laboratory in the US have found a way out, using chemicals polyborazylene and ammonia borane. This is a major advance towards hydrogen storage as ammonia borane can store hydrogen up to 20 per cent of its weight. This could mean a drive of 450 km on a single- filled tank, a goal set by the department of energy in the US. A set of similar recent breakthroughs around the world are now making hydrogen a viable fuel in future cars.

The Open And Shut Case

In this open source world, the camera remains one device that is completely proprietary. Once you buy a camera, you can hardly change anything in it. Engineers at Stanford University are set to remove this limitation. Called the Frankencamera, users could download software for the camera — just as they do for the iPhone — and experiment freely with focus, shutter speed, flash and other features. Imaginative developers can write programs that change the camera's response to light and motion, and add algorithms to program the camera to process images in innovative ways.

For example, algorithms can extend what is called the camera's dynamic range, or the ability to handle a wide range of lighting in a single frame. Computers could combine several frames with different shades of lighting into a single picture where every pixel is lit optimally. The Stanford team will make cameras themselves do the trick. Or, it can take low-resolution videos, and then, using a single high-resolution still image, convert these videos into high-quality video. Frankencamera will be made available to researchers first, before consumers get a chance to click it.