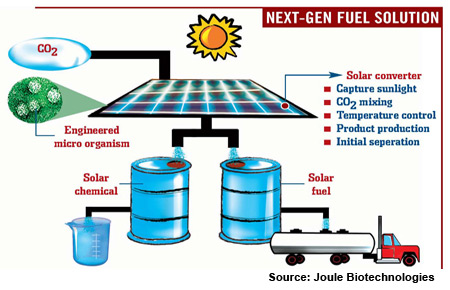 Fuel For The World

Massachusetts-based Joule Biotechnologies has come up with a new process for developing fuels for automobiles by using carbon dioxide, sunlight, some micro organisms, and nothing else. It requires no agricultural land or fresh water. The hybrid system uses a solar-concentrating converter that is filled with brackish water, nutrients and a "highly engineered synthetic organism" to produce a bio-based fuel. Similar attempts by other companies have been so expensive that crude has to cost several hundred dollars a barrel for them to be competitive. Joule believes it will be competitive with crude at $50 a barrel. The company officials claim they can meet the whole world's liquid fuel needs, and the commercial process will be ready for demonstration next year.

If you live in an earthquake-prone area, you are constantly worried about the great trembler. What if you knew that your house and office are safe from the worst possible earthquakes? Now some scientists have come up with a technology that makes buildings invisible to earthquakes. The idea is similar to what stealth aircraft use to make themselves invisible to radar. The scientists, based at the Aix-Marseille Université in France and at the University of Liverpool in the UK, have developed materials that reflect seismic waves in a similar way as Stealth aircraft deflect radar waves. The materials are made of concentric rings of plastic, copper and other substance of varying stiffness.

The scientists have published their work in the journal Physical Review Letters. They had used computer simulations to see if their principle works. It is the first time someone has studied the phenomenon for sound waves, and experts have termed it a revolutionary development. It could take a few years before an actual prototype is built. Buildings of the future could incorporate such ‘cloaking' technology.

Embryonic stem cells have been a controversial topic in many countries, especially in the US. While scientists believe these can cure many diseases in the future and want the restrictions on their use to go, some politicians and activists think otherwise. What if there is a substitute for these? The so-called induced pluripotent stem cells — normal cells that have been induced to become stem cells — are strong contenders, but they have not been seen to be as powerful as embryonic stem cells. But not any more.

A group led by Qi Zhou of the Chinese Academy of Sciences in Beijing and Fanyi Zeng of Shanghai Jiao Tong University used them and produced healthy mice at the same rate — 3 per cent — as we get from embryonic stem cells. Their work was published in the latest issue of Nature. In another paper published in Cell Stem Cell, a group of Chinese researchers report producing several pups from induced pluripotent stem cells. There is still a lot of work to be done on this front, but scientists have proven that it is possible to produce pluripotent cells that are similar to embryonic stem cells.