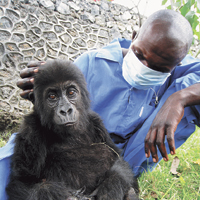 French scientists have discovered a new human immunodeficiency virus (HIV) in a woman from Cameroon. This woman had travelled to Paris from her country and had fever five years ago. The new virus is not like the three known varieties of HIV, but is related to a strain discovered in gorillas a few years ago. The discovery raises the chance that there are other people infected with the virus, but the method of transmission is unknown.

The scientists at the University of Rouen in France think the woman from Cameroon got the virus from a human being. She does not yet exhibit symptoms of AIDS. The discovery is the result of a recent screening programme for new immunodeficiency viruses. Though merging viruses escape standard laboratory tests, they need to be discovered before they cause an epidemic. The method of transmission of this virus to human beings is not known, but is believed to be the result of slaughtering gorillas for meat or keeping them as pets. All the three known immunodeficiency viruses are linked to chimpanzees. Scientists do not yet know how dangerous the new virus could be, but the discovery comes as a warning about the potential threat of HIV.

Why do some people become psychopaths? Neuroscience may, at last, have found a clue. Scientists at King's College in London found differences between the brains of psychopaths and normal people in terms of connectivity between two regions of the brain. Earlier, explanations for psychopathy had focused on social causes. Biological explanations had implicated areas in the brain associated with emotions and decision making. The British scientists show that the connectivity between these two regions may be the real culprit.

The region of the brain that controls emotions is called the amygdala. It is associated with emotions, aggression and memory consolidation. Previously, it was supposed to be, somehow, involved in psychopathy. Another region called orbitofrontal cortex, involved in decision making, was also supposed to be involved in psychopathy. However, the British scientists looked at the part that connects the two, in normal people and psychopaths. They found significant abnormality in psychopaths. The greater the degree of psychopathy, the greater was the abnormality. This discovery opens new possibilities for treatment of aggressive antisocial behaviour.

For all the scientific insights and technological advancements in the last century, pharma companies have not been able to make some drugs in the laboratory. As they have not been able to simulate or create nature's processes, scientists extract these drugs from various natural sources. This, in some cases, is prone to contamination, not to speak of high costs. This week, scientists at the Rensselaer Polytechnic in the US made in their labs a part of a cell that plays a key role in many a biosynthesis. It is called the Golgi apparatus.

The Golgi apparatus was discovered more than a century ago, but its workings have remained a mystery until now. It processes proteins that go out of the cell, often adding sugar molecules that are critical to their function. But we did not know precisely how they did it. The US scientists made their own Golgi apparatus. They made a chip that mimics Golgi. They are now trying to use their creation to make heparin, a multibillion-dollar cancer drug extracted from pigs. More will follow suit.