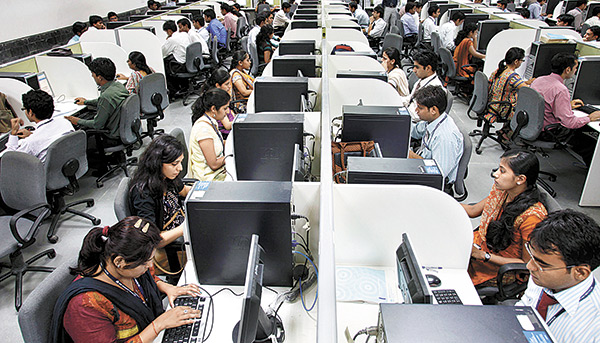 08 November, 2014
Print this article Font size -16+
N. Umesh, a software engineer with a startup, says very few of his 2011 batch at the Ambedkar Institute of Technology, Bangalore, have found jobs. “I consider myself lucky. In the past, companies like TCS, HCL, Mindtree and MphasiS have hired from our college campus, but not this year.” India produces 550,000 engineers annually. Till a couple of years ago, nearly half of them could have expected to be absorbed by IT companies. After all, the $100-billion IT sector, which constitutes 7.5 per cent of India’s GDP, and employs about 2.8 million professionals, is one of India’s largest job creators.

The Naukri Job Speak data for the past six months shows that IT is still the largest net new jobs creator (20 per cent of all white-collar jobs in India come from IT, says Hitesh Oberoi, MD and CEO, naukri.com). But, only 120,000 IT jobs are being created now, says Rajeev Menon, head of innovation and product management at Meritrac, an assessment services firm. Industry body Nasscom estimates that while the sector hired 180,000 people last year, this year, it will be down 30 per cent.

Though Nasscom expects Indian IT to grow 12-14 per cent this year, some of the larger players like Infosys have indicated single-digit growth. Even faster-growing ones such as HCL are averse to hiring freshers. Worse, the situation may be permanent. Indian IT is moving away from manpower-intensive, low-end work. Moreover, for some of this work, companies are hiring science and commerce graduates. Says Menon: “There will be more specialised hiring now. For example, a Microsoft-certified engineer will be preferred over a normal engineer.”

Things are likely to turn rough for those passing out from tier 2 and lower-ranked engineering colleges. The top rung may be spared. “We expect hiring to be as good as last year, when most companies recruited robustly,” says S. K. Srivastava, placement officer at IIT Kharagpur. Slow growth over the past few years has meant that utilsation rates in most IT companies are low, hovering in the mid-70s. That means of 100,000-200,000 employees, 25,000-50,000 are on the bench. This implies that companies can grow by just improving utilisation. Also, protectionist measures such as the US visa Bill will lead to Indian firms hiring more locals in their overseas markets.

Hiring patterns are also changing. Prithvi Shergill, head of HR at HCL Technologies, which plans to hire a few thousand, says, “As opposed to hiring in bulk at the beginning of the year, we will look at hiring round the year depending on business requirement.” Other companies are doing the same. Sunil Goel, CEO of recruitment agency GlobalHunt, says, “Most companies are hiring based on the projects that they have in hand, as opposed to hiring on the basis of future expectations. Most IT companies would earlier hire 15-20 per cent of their size, factoring in growth and attrition. But this year, the number will remain in single digits.”