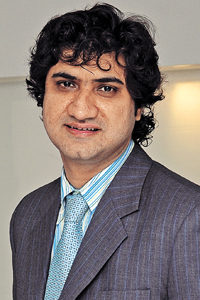 08 November, 2014
Print this article Font size -16+
Sanjeev Mansotra's office is a few metres away from where Ekta Kapoor's Balaji Telefilms scripts soap operas by the hour. A few blocks away the entire Bollywood fraternity gathers for their annual awards show at India's version of a Kodak Theatre, the Yash Raj Films Studios. The headquarters of Core Projects and Technologies also has actor Hrithik Roshan's office and Reliance Dreamworks, the JV with Hollywood legend Steven Spielberg, as neighbours.

In what seems like the heart of the Hindi show business, Mansotra is scripting a different storyline. The core business of his company, Core Projects and Technologies is education. It is a business that is now spread across three continents — the US, Europe and Africa — and a business that has made him India's most ‘value'able CEO in the small companies category.

Still this script could have gone awry. As Mansotra admits, the company started operations seven years ago "without a vision to where it was heading". The initial business plan was to acquire IT companies in the US with on-shore delivery capabilities and move their services to offshore delivery centres in India.

Typically, these companies were owner-driven and had revenues in the range of $5-20 million. They delivered earnings before interest, taxes, depreciation and amortisation (Ebitda) margins of 10-12 per cent, but had huge overheads like unusually high promoter salaries. If these operations were made efficient, then margins could improve to 30-35 per cent.

"We acquired three companies and one company was by default also into the education space," says Mansotra. What started off as a default soon became a grand design. The defining moment came with a front page story in a national daily that spoke about how most of India's expenditure in education was being misused — a news clipping that he still retains.

Another source of inspiration came from a Planning Commission report, which stressed on how only 12 per cent of India's children enrolled for higher education as opposed to a global average of 26 per cent. For developed countries, the average was 55 per cent and for India's most-compared neighbour, China, it was 24 per cent. "With one of the youngest populations, there was clearly a big opportunity in the Indian education space," says Mansotra.

Soon his acquisition strategy was to look for a width of offerings in the education space. If one acquisition gave him access to child-tracking software, the other had formative assessment techniques. Similarly, if one acquired company
had a certain set of state governments in the US as its clients, the other would have another set of US state governments on its client list.

"This helped in cross-selling products," he says. Through the inorganic route, Core was catering to as many as 20 state governments in the US, eight countries in Africa and 40 local education authorities (LEA) in the UK. Today, over 95 per cent of the revenues of the company come from the US market.

As of the last fiscal, 75 per cent of the company's revenues came from education sales, with ERP services, consulting and logistics making up the rest. Mansotra says that the "game changer" happened in 2009 when Core acquired the K 12 service division of The Princeton Review. The K 12 division helps schools strengthen their students' academic skills and improve their performance on high-stakes state tests. Core also tied-up with the Oxford University to create modules for which it will have a joint IPR.

Now Mansotra is perfecting his India strategy. "We will follow a brick and mortar strategy for India," he says. In two years, Core plans to set up 30 schools in India catering to different socio-economic strata. There are "model schools" for tier-II towns that will be setup in a public private partnership model. Then there are international schools and sports academies that are being planned. The last one is a personal passion for Mansotra who has played every sport barring golf. Is that because he does not enjoy a day at the greens? "I have to leave something for old age," says the 38-year-old.

It will be a while before he gets to golf. At this point of time, neither Mansotra nor his plans seems to be showing any signs of graying. A self-confessed fitness buff, he is known to hit the gym every day — a luxury in Mumbai that he can afford as his home is just 10 minutes away from office. His passion for fitness and sports has not just
led to schools but also a group company Core Wellness. Employees say that Mansotra's people skills enable him to attract, train and retain the best talent in his business.

With a $250-million turnover, Mansotra is now aiming to be a top-10 global player in the education business. "In the global top 10, there is a huge difference in the turnover of the top five players and the bottom five," he says, and adds that the faster his company doubles its current turnover, easier its chances of getting into the hallowed circle. In the company of the stars from India's showbiz, Mansotra and his company are aiming for the stars.