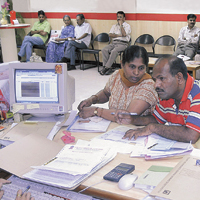 08 November, 2014
Print this article Font size -16+
Old cases are being dug up and pending investigations expedited by issuing demand notices to defaulters. As the current fiscal draws to a close, tax evasion is being tackled head on to meet indirect tax collection target for 2012-13.

According to latest data, a shortfall of about Rs 88,000 crore still exists to meet the Rs 5.05 lakh crore target set by Finance Ministry for indirect tax collection, comprising service tax, excise and customs duties, in the current fiscal.

The chiefs of these financial intelligence departments are also holding weekly meetings to discuss the progress of their respective cases and gauging the 'tax gap' to be filled up before March 31, when the current fiscal ends, they said.

About Rs 4.17 lakh crore as indirect tax has been collected between April 2012 and February this year, it said. The excise duty collection during April-February period in 2012-13 was Rs 1.54 lakh crore, customs duty at Rs 1.5 lakh crore and service tax at Rs 1.13 lakh crore.

Revenue Secretary Sumit Bose early this year had given a stern warning to excise, customs and service tax evaders to either pay dues on time or face penal action which could include arrest, prosecution and property attachment.

Finance Minister P Chidambaram had in his budgetary speech for 2013-14 highlighted that only seven lakh out of nearly 17 lakh registered service tax assessees were filing returns. Sources said the agencies are working in coordination with the Financial Intelligence Unit (FIU) and sharing information from a database of tax defaulters.

The DGCEI had recently issued show cause notices to various firms raising outstanding demand. Similarly, custom officials are also on their toes to check any wrong doing and giving extra attention on all goods consignments for any duty evasion or smuggling.

The DRI has sped up its probe in all pending cases so that demand notices could be issued during the ongoing fiscal only, the sources said.

The officials were giving more attention on real estate firms and infrastructure sector based companies including those involved in iron and steel products making to check defaulters, they said.

Both the DGCEI and DRI had detected service tax, central excise and customs duties evasion of Rs 2,670.51 crore and recovered over Rs 880 crore from various defaulters during the last quarter ended in December.