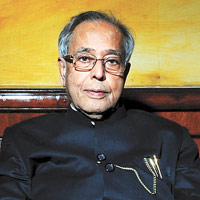 08 November, 2014
Print this article Font size -16+
The practice of multi-national companies parking their profits in tax havens to evade or avoid taxes is a challenge for the I-T department and it should positively tackle these issues, President Pranab Mukherjee said in Nagpur.

"More than three-fourth of business transactions of the multi-national companies is being done through their various units," he said.

The basic objective of such units is to locate places where rate of taxation is low to evade or avoid tax, he said.

"Transfer pricing is one of the most complicated task which you (I-T officers) shall have to discharge and I have no doubt you will render excellent services to your motherland," Mukherjee said as he complimented 115 passing out officers of the 65th batch of the Indian Revenue Service (IRS).

The batch had joined the portals of the National Academy of Direct Taxes (NADT) in Nagpur, the alma mater of IRS (I-T) officers, in 2011 after clearing the civil services exam.

Mukherjee's statement assumes relevance as India, along with a host of emerging economies of the world, is working towards a streamlined tax regime where the due revenue of a country is collected at the appropriate jurisdiction and the relevance of tax haven jurisdictions is negated to the least.

India is an active member of top economic bodies like the Organisation for Economic Cooperation and Development (OECD) and Financial Action Task Force (FATF) to realise these objectives.

The President said India has inked a number of Double Taxation Avoidance Agreements (DTAAs) and Tax Information Exchange Agreement (TIEA) which has made it easier to obtain banking information from a foreign country in cases of cross-border tax evasion.

"Some of the recalcitrant countries are now compelled to divulge information about tax avoidance and evasion, he said.

The President said while tax collections have increased phenomenally, the revenue collection is still below the expected target and the tax officials should put in sincere and honest efforts to achieve them.

"Tax collection is neither a simple or a popular task ...but you (officers) have to discharge your duty and be sensitive to right and privileges of citizens.

"One of the most important ingredient of your duty would be your behaviour to the taxpayer. He or she is a partner for you and you have to also ensure that the revenue target is reached," he said.

The Indian economy has seen a sea change over the years and it is now rated as the third largest economy of the world, he said.

The President also said the modernisation of tax laws was very critical and that direct tax laws are anti-inflatory in nature as compared to customs duty and federal excise.

He said the department has initiated a number of taxpayer friendly steps like simplified I-T return forms and many major complaints have been dealt with in the Direct Taxes Code.

He recalled the famous talisman of Mahatma Gandhi where he had said that when someone in power has a doubt about the decisions he or she has to take, the person should ask if the step one is contemplating will be of any help to the weakest of the society and then take a decision.

Mukherjee also noted his old association with the NADT, when he used to visit the institution as the Union Finance Minister.

The young officers should render their duties without "any fear or favour," Mukherjee said while also asking them to be ethical and moral.