Tax Dept Writes To Another 35,000 People To File Returns 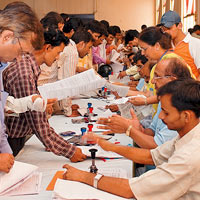 08 November, 2014
Print this article Font size -16+
The Income Tax Department of India has written to another 35,000 people this week, asking them to file returns and pay dues.

"As part of a massive exercise to identify high risk non-filers of income tax returns and ask them to file returns and pay taxes thereon, the Income Tax Department has sent letters to another batch of 35,000 non-filers this week," the Finance Ministry said in a statement Friday, 13 September.

With this, the department has issued letters in 0.245 million cases. It has identified 1.2 million people who do not file returns and is taking follow-up action on them.

"As a result of this exercise, 3,44,365 returns have been received from the target segment. Such persons have also paid self assessment tax amounting to Rs 57.7 million and advance tax of Rs 40.8 million," it said.

The department now proposes to extend this exercise to persons who have conducted high-value transactions during the 2010-11 and 2011-12 fiscal years, it added.

The Finance Ministry is also developing a dedicated module on the e-filing portal which will give individual taxpayers details of returns not filed, ITR-V not submitted and demand not paid, among others, as a step towards greater transparency.

The government plans to collect over Rs 6,680 billions from direct taxes in the current fiscal, up from Rs 5,650 billions in the previous fiscal.