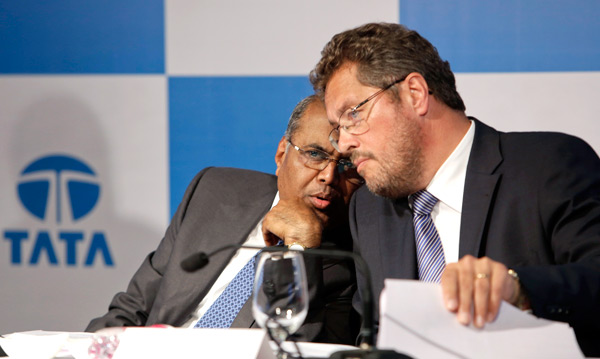 Analysts had expected profit of Rs 364 crore on sales of Rs 35,016 crore, according Thomson Reuters I/B/E/S.

Earlier, on 13 May, the company said it would write down goodwill and assets by $1.6 billion in the financial year that ended in March, mainly because pf weakness in Europe, where demand has fallen by almost a third since 2007.

Earlier this month, Tata sold S$300 million worth of bonds due 2023 in the longest-dated bond from an Indian private sector company in that currency.

There was little reaction on the bonds since most are held by overseas Indians who invest on the basis of name familiarity, although credit analysts were downbeat.

The $500-billion-a-year steel industry has been hit hard by a drop in demand from Europe and slowing growth in China. Earlier this month, ArcelorMittal, the world's largest steelmaker, said European steel demand was almost 30 percent below peak-2007 levels and set to fall further in 2013.

Tata, which operates nearly two-thirds of its 28 million-tonne capacity in Europe, has posted a loss or lower profit for the past three quarters. Its March quarterly results are due on May 23.

The investor community has clamoured for Tata to sell some of its high-cost UK plants and recent media reports have said the company has considered selling some of the assets there.

"It's just the kind of business you don't want to be in, especially their UK assets; they are higher-cost," said William Schramade, materials equity analyst at Robeco's 7 billion euro Global Equity fund.

Tata Steel had net debt of $10.5 billion at the end of December, much of it resulting from its $13 billion acquisition of Anglo-Dutch steelmaker Corus in 2007. It is also in talks to raise about $6 billion for a 3 million-tonne steel plant in eastern India.