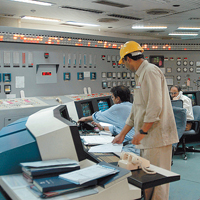 08 November, 2014
Print this article Font size -16+
Delhi's premier discom Tata Power Delhi Distribution Ltd has bid for three power distribution companies in Nigeria by forming two separate consortiums with two leading companies of the African nation. If TPDDL, a subsidiary of Tata Power, wins the contract, then it will be the first Indian discom to get involved in power distribution in a foreign country. The total investment required in three discoms has been estimated at $900 million (approx. Rs 1,560 crore).

The Nigerian government had decided to privatise 11 state-owned distribution companies as part of reforming the power sector and a total of 54 companies had bid for them out of which 21 firms including TPDDL have cleared the technical evaluation process. Senior General Manager of TPDDL Vivek Singla said the company had bid for Eko and Ikeja discoms as a member of Oando consortium and for Benin discom, the company has formed a consortium with Viego Holding Ltd. "Both the consortiums have qualified for all three discoms. The total investment in three discoms has been estimated at around USD 900 million," Singla told PTI. He said as per the understanding, TPDDL has the option of acquiring up to 51 per cent stake in the consortiums over a period of time.

Asked how the TPDDL will arrange the funds if it wins the bid as it has been facing financial difficulties, Singla said Tata Power will arrange the funding by providing equity. "If our consortiums win the bid, then TPDDL will be the first Indian discom to operate in a foreign country," he said, adding, the winner of the bid will be declared on 16 October.

The companies which cleared the technical qualification round in the bidding process include Honeywell, Integrated Energy, West Power and Gas, Rensmart Power and Rockson Engineering, most of which operate in various countries. Nigeria embarked on the power sector privatisation process in 2010 and received huge response from both national and international private sector participants. Nigeria's Bureau of Public Enterprise (BPE), which has been tasked to carry out the reform process, has adopted the 'Delhi model' to privatise its power distribution sector, TPDDL's Corporate Communications chief Ajay Maharaj said. The Delhi government had privatised power distribution in 2002 and handed over electricity distribution to three private entities.