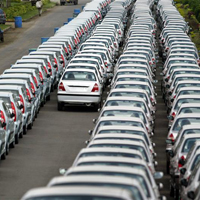 Analysts on average expected a net profit of Rs 2,234 crore, according to Thomson Reuters data.

The company reported total sales at Rs 46,785 for the quarter against Rs 43,324 crore reported in the year-ago period.

What comes as good news for the company, JLR margin was at 16.5 per cent against 16 per cent year-on-year.

Tata Motors plunged nearly 4 per cent ahead of its numbers and was the top loser among the BSE Sensex components.