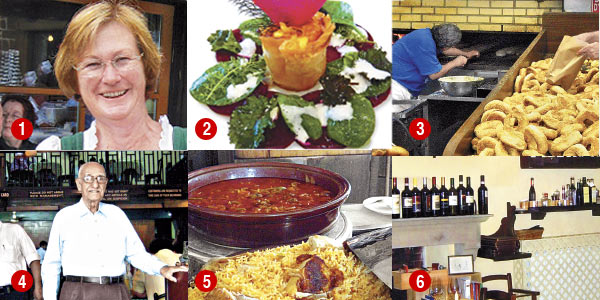 08 November, 2014
Print this article Font size -16+
Kaminstube, Hotel Zur Tenne
Cuddled up between the snow peaks of the Tyrolean Alps in Austria is the world’s most exotic Alpine haven. At this gourmet restaurant, master chef Juergen Bartl has been enrapturing guests with his Tyrolean delights. His ‘Jochberg parsnip cream soup with mushrooms and paprika foam’ and the ‘Alpen farm-fresh Tyrolean greens in aromatic Kurbis Kernol (sunflower seed oil) and pepper essence’ woke us up to an organic cuisine culture. ‘Tyrolean vegetable basket on a bed of beetroot carpaccio, basil and hill cheese’ was mouth-watering. We also had ‘Black salsified tagliatelle in white wine and truffle sauce with Aurach poached eggs’. Zum Wohl!

Gasthaus Graflhohe
In the lush Bavarian Alpine valleys in Berchtesgaden, Germany, is this petite ‘gasthaus’ (guesthouse),  patronised for its one prized experience. Something food freaks drive all the way from Munich to dig into: the three-tier dessert called Windbeutel Baron. It took us a good 20 minutes to ‘deconstruct’ the Windbeutel (windbag). Alternating with delicious cream and pastry base topped with a red cherry, it is filled with variations of vanilla ice cream with sour berries, blueberries, raspberries, chocolate sauce, walnut liqueur or ice cream, egg and even diabetic puffs. As we immersed ourselves into its enticing layers, another one was on its way…
Britannia & Co
In the heart of Ballard Pier lies the quaint, 90-year-old Britannia & Co. Here, at one of India’s finest Persian restaurants, the aroma of sandalwood incense and oven-fresh delicacies, the warmth of the interiors and its affable owner Boman Kohinoor in his nineties are all subjects of nostalgia for many. The ‘Iranian Berry Pulao’ or ‘Polo Ye Zereshk’ in Persian (rice, Persian barberries, nuts and gravy) is one of Britannia's signature specialties. The typical Parsi Dhansak (brown rice, mixed daal served with meat or potato kebab) has its own dedicated fan following.
Café Liman
The magnificent expanse of the deep blue Aegean Sea dazzles as one devours mouth-watering Turkish delights at Izmir’s Liman Café. Al fresco lunching on a relaxed afternoon at Liman, watching the anchored ships and the lilting strains of a Kemence violin are quintessential Turkey. Among the most sought-after sweets is the Baklava, the delicacy of the former Ottoman Empire, Central and South-west Asia. Layers of filo pastry, chopped nuts sweetened with honey or sugar syrup make the Baklava a mystery for the palate. Each bite only made us salivate for more, and sips of Turkish chai provided a fine punctuation to the exhilaration.
Viateur’s Bagels
Montrealers like eating and drinking at all waking moments of the day. Our hop into the sizzling confines of St Viateur’s Bagels opened up the windows to the gastronomic icon envied by its New York competitors. The wood-fired ovens churn out melt-in-your-mouth, butter soft bagels dressed with roasted sesame and cream cheese. Salivating Montrealers, many rushing to catch the New York shuttle, queue up to make sure they get their bag of hot bagels. Variety is limited, but quality is assured.  Bagels to die for. N’est-ce pas?
Osteria Del Teatro
Stone-walled in a narrow lane near the cathedral, this eatery in Toscana, Italy, prides itself on more than one indulgence. You are entertained by a waiter who is reportedly the world’s fastest wine bottle opener. From grab to pop, he jerks out the cork, noses it and fills your goblet before you can even drop your jaw! Their ‘Carpaccio of wild Cortona mushrooms in olive oil, garlic, oregano, sage and lemon squeeze’ is heavenly. The ‘Strozzapreti (pasta) of walnuts, pesto and extra virgin olive oil’ is enjoyed with Toscana red wine. La Dolce Vita!