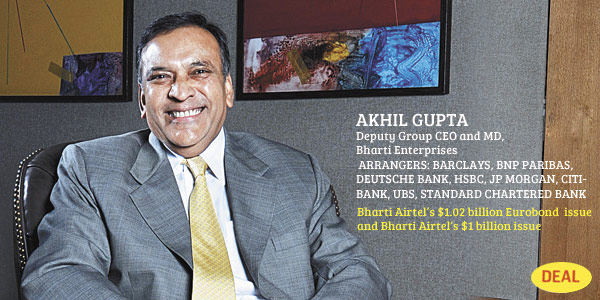 08 November, 2014
Print this article Font size -16+
Many years ago, Phileas Fogg went ‘Around the World in Eighty Days’ for a wager of £20,000. Years later, in February 2013, a four-member team from Bharti Airtel did the same in five days. It met 150 investors across three continents. Result: the company attracted offers to the tune $9.5 billion by March.

Thanks to the overwhelming response, Bharti managed to raise $1 billion through the sale of 10-year foreign currency bonds at an attractive interest rate of 5.13 per cent. Bharti hit the market again with a Eurobond issue in November. That happened to be the first telecom Eurobond issue from Asia in 2013 and the second largest Eurobond deal in Asia (excluding Japan) during the year. After a three-day roadshow across London, Paris, Amsterdam and Frankfurt, the company raised €750 million ($1.02 billion).

Bharti managed to swing both issues in a year that has been particularly tough for the Indian telecom industry. In fact, it struck the deals at a time when the company’s profits had fallen for 12 consecutive quarters, and it had an accumulated net debt of over $11 billion (Rs 63,840 crore). The joint lead managers for the US bond issue were Barclays, BNP Paribas, Citibank, Deutsche Bank, HSBC, Standard Chartered Bank and UBS, while for the Eurobond issue the lead managers were Barclays, BNP Paribas, Deutsche Bank, JP Morgan, Standard Chartered Bank and UBS.

The question is how did Bharti do it? First, it is the dominant operator in a telecom market that is still growing. Besides, it is the fourth largest telco globally in terms of subscribers and is ranked among the Top 100 Most Valuable Global Brands. That makes things a lot simpler for bankers. “The credit positive for Bharti was that the bond issue was primarily for refinancing with extension of maturities. It did not increase Bharti’s overall debt levels,” says Ganeshan Murugaiyan, MD and head of investment banking, BNP Paribas India.

Says Ravi Kapoor, MD and head of corporate and investment banking, Citibank  India: “An astute book-building strategy saw significant price tension and book-building momentum, resulting in a tightening of 37.5 basis points from the initial guidance to the final pricing.”

Bharti has done what no one else could do in the current market. The big difference between other Indian telecom service providers and Bharti is that despite its high level of debt, the company has been able to reduce its debt-Ebitda (earnings before interest, taxes, depreciation and amortisation) ratio to around 2.05.

On raising $2 billion in a year, Akhil Gupta, deputy group CEO and MD, Bharti Enterprises, says: “Investors are careful in a tight market. However, companies with high ratings and reputation get preferential treatment.”

Says a telecom consultant: “Due to Bharti’s dominant market share in India and its overseas presence, it managed to attract the maximum investors by an Indian company in recent times.” It does help if you can tap the audience in a short period. —