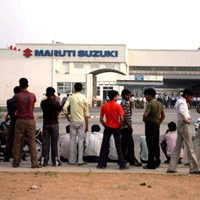 According to the police, three representatives of the workers - Sonu Gujjar, Shiv Kumar and Ravinder Kumar have been detained as talks that started on Friday evening failed to yield any results.

MUKU had represented the Manesar plant workers during the negotiations as the management refused to talk directly to the rebel union, Maruti Suzuki Employees Union (MSEU).The three detained workers are office bearers of MSEU.

Haryana Minister for Labour and Employment Shiv Charan Lal Sharma held talks with the company's management and workers of the Manesar plant - along with representatives of MSI's recognised union Maruti Udyog Kamgar Union (MUKU) - on Friday and Saturday but a result proved elusive.

The talks continued Sunday in the presence of state labour department officials but an agreement was out of reach.

The MSI management and workers have been locked in a standoff since August 29, when the management prevented workers from entering the factory premises unless they signed a 'good conduct' bond, after alleged sabotage and deliberate compromise on the quality of cars being produced.

In support of their colleagues at MSI's Manesar plant, workers at three factories operated by two of Japan's Suzuki Motor Corp's subsidiaries located in the Gurgaon-Manesar industrial belt - Suzuki Powertrain India Ltd and Suzuki Motorcycle India Pvt Ltd - went on strike on Wednesday afternoon but was called off on Friday.

The bond requires the workers to declare they would "not resort to go slow, intermittent stoppage of work, stay-in-strike, work-to-rule, sabotage or otherwise indulge in any activity, which would hamper normal production in the factory".