Tales From The Killing Fields 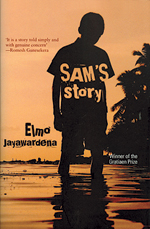 Sam's story is the debut novel of Singapore-based writer Elmo Jayawardena. The strategically placed narrative of the novel captures the story of a house boy in Sri Lanka. Through Sam's story, the author maps the different faces of contemporary Sri Lanka.

The story begins with Sam, the house boy, starting his life at his master's house, the River House. There he befriends many, especially the master's son and dog. Sam's story ends with a certain tragic incident in the master's family.

In between, the story traces Sam's roots as well. The narrative, seamlessly shifting through time zones, tracks two locations: the River House and Sam's village. Sam comes from an unrelentingly harsh environment. His bleak past is unspooled when he tells us instances such as how he would rush back home from school to tell tall stories of the sweets he ate, where in reality he had got only wrappers. He tells us how his mother would take care of her six children, and how the polls promised them everything, but gave nothing. Sam recalls how he lost his friend Piya in the floods. One of Sam's brothers dies in the war. Like Bertolt Brecht's Mother Courage , Sam's mother is left with the loss of her children.

The understated voice and tone of the book uplift the mood, leaving the reader with knowledge of a place and its people who remain resilient in the face of horror. Jayawardena achieves this by infusing a simple hope in Sam, which, in some ways, survives his harsh life.