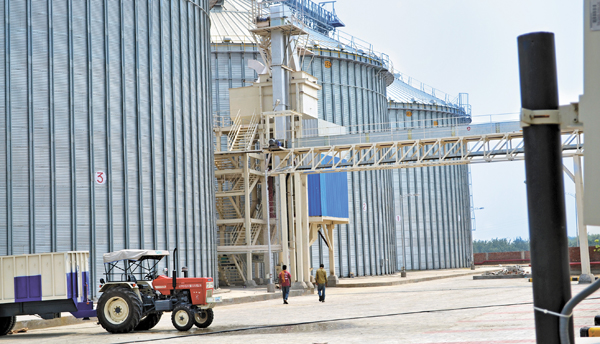 08 November, 2014
Print this article Font size -16+
Nobody is quite sure how much of the grain procured every year by the government gets wasted because of lack of proper storage facilities. Estimates vary from 10 million tonnes (mt) to more than three times that figure. Even the most conservative estimates put the loss at a few hundred crore rupees annually for the government.

There are two main reasons for the wastage. First, the government routinely procures far more grain than that can be stored in its warehouses, which means that much of the grain is actually stored in rudimentary and make-shift structures. Second, and equally important, the permanent warehouses lack temperature and humidity control facilities, and don’t offer the kind of protection that is needed.

Though the Food Corporation of India (FCI) is planning to significantly augment its storage capacity in the next couple of years — around 11mt or so — analysts feel that these facilities will not be enough to keep vast quantities of foodgrains from rotting in the open.

For the Punjab State Grains Procurement Corporation (PUNGRAIN), lack of storage facilities is particularly galling. Punjab accounts for 36 per cent of India’s wheat production of 90mt. The gap between what PUNGRAIN procures annually and the storage facilities available to it is to the tune of 7mt. Three years ago, as an experiment it tried to outsource the storage of some of its grain to the private sector, in return for a fixed annual payment for 30 years.

The result was Punjab Silos, a modern storage facility at Mulechak (near Amritsar) that became operational in May this year. Built by mid-sized rice exporter LT Foods, it consists of four state-of-the-art, temperature-controlled steel silos capable of storing 50,000 tonnes. PUNGRAIN estimates that even after paying LT Foods at the rate of Rs 1,400 per tonne annually, it will save Rs 30 crore over the life of the storage facility — Rs 1 crore a year.

Sure, 50,000 tonne is a drop in the ocean when compared with the total storage capacity that PUNGRAIN needs, but it could be the first step for a long-term solution. In fact, the initial results have emboldened nine other states to try out the solution. Using the public-private partnership (PPP) model, this could amount to 2mt of additional storage facilities over the next few years. These facilities would require an estimated investment of Rs 1,200 crore.

The Experiment
The Punjab government and PUNGRAIN tried out the PPP model after some prodding by the International Finance Corporation (IFC), the investment arm of the World Bank. The argument: the PPP model had proved successful in the infrastructure and power sectors, so why couldn’t it be applied to India’s unorganised agriculture business — more specifically, in developing long-term storage silos?

The normal route followed by the government is that the grain is procured by the state agencies, and then bought by the FCI. The FCI stores the grain either in its own warehouses — basic concrete structures in most cases — or pays a certain amount as storage fees to the state procurement agency. Faced with storage problems, PUNGRAIN had the option of either waiting for the FCI to built new facilities or building its own facilities. But the latter would have required significant capital investment. Even to build basic concrete warehouses without temperature and humidity control would have cost Rs 3,000-3,500 per tonne of capacity.

IFC managed to persuade PUNGRAIN to explore the PPP model. In this, the private partner would build, own and operate (BOO) the grain storage facility. In return, PUNGRAIN would guarantee it fixed payments (with an annual escalation clause) for the lifetime of the facility. The idea was to build a proper silo that would improve storage and cut out spoilage. But such a silo would cost around Rs 5,000 per tonne — significantly more than what’s needed to build the normal warehouses.

It took almost a year to design the project and evaluate the bids. Structured as a 30-year concession on the BOO model, the project drew 33 bidders, including five international players and some of India’s leading commodity trading firms. LT Foods eventually won the bid and got the project in May 2010.

Four steel silos, each measuring 105 ft in diameter and 88 ft in height (roughly equivalent to a seven-storey building) were erected, complete with conveyers, elevators and a bagging plant. Each of the giant bins has a capacity of 12,500 tonnes. The total cost: around Rs 35 crore.
break-page-break
LT Foods had, in fact, started experimenting with silos at its five milling plants 15 years ago, when the concept was unheard of. Paddy is harvested in October/November, but milling takes place throughout the year. Hence, good storage worked as a critical advantage for the company. Adapting that model to wheat storage helped it ramp up quickly, and that helped it to respond to the tender successfully, says J.S. Oberoi , associate director at LT Foods.

“Food storage in India is lot more than just storage,” says chairman Vijay Arora. “It’s about food security.” If these projects cost more, they also achieve long-term benefits such as reducing labour cost and easing pressure on land. The Mulechak facility, for example, has been constructed in an 8-acre area that would have otherwise taken up 20 acres in conventional storage.

Previous Attempts
But this isn’t the first time that the PPP model in storage is being tried out. Eight years ago, FCI had collaborated with the Ahmedabad-based industrial house of Adanis to set up 2 mt storage facilities, each, in Punjab’s Moga and Haryana’s Kaithal districts. The project was structured as an integrated storage and logistics model in which the two base depots were linked with five downstream depots in Bangalore, Chennai, Coimbatore, Hooghly and Navi Mumbai. Railway links to carry grain from the silos to the distribution points were provided for. The farmers were to bring their produce directly to the depots to be stored and transported in specially designed wagons. The project was designed by government-owned transport consultancy, RITES.

But despite the elaborately planned facility, the project never took off in the manner it was envisioned. There were several reasons for that, explains an agri-business expert, who did not want to be named. The project sought to overhaul the system by eliminating ‘artiyas’ (commission agents) and enabling farmers to bring their produce directly to the depots. Since all handling was to be mechanised, it also meant eliminating labour — both these measures replete with political pitfalls.

The depots never really became the grain markets that they were intended to become, primarily because Moga and Kaithal were never notified as ‘mandis’  under the Agricultural Produce Marketing (Regulation) Act due to political pressure from grain merchants.  That put paid to any expansion plans the Adanis might have had for grain storage business.

Different Externalities
There is a more basic problem. Externalities of grain storage are totally different from that in the US farmlands, for example. Landholdings in the US are not fragmented and small like they are in India; neither does the US have a public distribution system (PDS). A typical farmer in the US cultivates 5,000 acres on an average, harvests the produce mechanically and stores it in a silo located on the field. When he wants to sell, he transports it directly to a large bakery, for example, or to the closest port for export.

In contrast, in India, most farmers till land no larger than 2 acres, and the entire produce and its storage apparatus is geared towards feeding the PDS. For the small farmer to reach the small consumer, the gunny bag is an indispensable component that the Adani project tried to do away with. “You can’t just import solutions from the West in the Indian context,” says the expert. The Adani project was probably ahead of its time.

A more fundamental lesson in all of this is that private sector solutions for grain storage have become imperative now. But the interest of companies in agriculture is not a trend yet; it is only a manifestation of the interest, says Tushar Pandey, president, strategic initiatives at YES Bank. Which explains why corporate ventures in agriculture have been sporadic. Also why there is yet to be a chain of backward-forward linkages through corporate investments. What is needed, instead, is a shift away from the regular grant-and-subsidy model to a social equity model based on PPP in which the farmer is a direct stakeholder, says Pandey. But political participation and conducive policies is more important than developing farmer-corporate linkage, he argues. Thanks to the successful implementation of PPP silos, agriculture storage is now eligible for viability gap funding, a state-level incentive scheme to provide grants for PPP projects.

But the real success of the silos pilot has been its replicability across other states: Assam, Bihar, Gujarat, Haryana, Kerala, Madhya Pradesh, Maharashtra, Uttar Pradesh and West Bengal. That’s 40 more complexes like the Mulechak facility. The empowered group of ministers on food has mandated the FCI to develop grain silos with the private sector, making it possible for the states to store grain beyond the harvest season. All the nine other states have already identified locations, and the projects may be awarded by 2013.

IFC is taking the solution to other countries too. In Pakistan’s Sindh and Punjab province, the experiment is being modified to add other elements such as ancillary land development and wheat grading, further refining the PPP business model in the process. The Philippines, Uzbekistan and Zambia, with similar grain losses, have all expressed interest in the project.