Takes From The Top 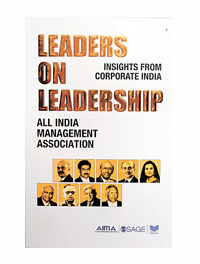 08 November, 2014
Print this article Font size -16+
They made it big. But their journey to the top was never a cakewalk. Adi Godrej took up odd jobs including one as a bell-boy to earn enough dollars in an era when Indians could not take much foreign exchange even for overseas studies. As a young intern, Murugappa’s M.V. Subbiah (former chairman) was sent out to get paan for his distributor. India Inc boasts of several such leaders, and a new book attempts to chronicle their ideas on leadership. Leaders on Leadership compiled by the All India Management Association intends to bring to the fore leadership traits through narratives of nine well-known industry leaders, from N.R. Narayana Murthy of Infosys to Deepak Parekh of HDFC.

The stories are written in simple prose and some of the nine chapters read like speeches on milestones in the authors’ lives. The selection spans a series of sectors — from banking to IT to media. It covers a long stretch of time, from the days of License Raj in the 1970s and 1980s when the domestic market was not open to international entities to the present day, and the content makes for an interesting reading.

One fascinating story is that of Tarun Das and the evolution of the Confederation of Indian Industry under him for over four decades. The story seems almost scrubbed free of any political incorrectness or intrigue, which is surprising given the power hub the trade body has been over the years and its evolution from a nodal body for engineering companies into a pan-industry entity. Another interesting piece is Das and Chanda Kochhar’s tribute to the role of younger employees in their organisations.

For a book that is meant to be serious business literature, the content across various chapters are not consistent in their quality. The reader is presented with two forms of narratives: one, which includes inspiring tales of Godrej and K.M. Birla, who were not necessarily lacking in privileges from birth but who managed to place their experiences in the right context, and two, tales of certain personalities that do not necessarily convey their leadership lessons well to an audience unacquainted with India’s business history — these stories help the reader appreciate the scale of growth of the company and the industry rather than understand what the authors personally did.

Thus, readers will perhaps recall R.A. Mashelkar’s interventions in the transformation of the government-run National Chemical Laboratories and later the Council for Scientific and Industrial Research; but they will strain to recall what exactly happened in some other industries.

Despite the occasional promise, the book falls short of its stated objective to be a reference; the content is neither detailed enough to be a biographical narrative nor is it structured like a case study. And for a book that explores a topic that is as rich as this, one expected tighter editing.