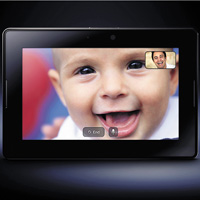 Smartphone maker Research in Motion (RIM) marked its entry in the tablet market — dominated by Apple's iPad — with the launch of BlackBerry PlayBook. The tablet will be commercially launched in the US in January next year, and an international launch is expected only in the second quarter of 2011. RIM unveiled the PlayBook with its 7-inch screen and two (front and rear) high-definition cameras at its annual conference in San Francisco. The device has a dual-core 1-GHz processor and runs on a new opera-ting system. The PlayBook is less than half an inch thick and weighs 400 gm. It supports Wi-Fi and Bluetooth, and RIM intends to offer cellular-capable versions in the future. It has a 1,024-by-600-pixel touchscreen and high-definition video playback. It supports both Adobe Flash Player 10.1 and HTML 5.

Thousands Protest Across Europe Against Austerity

Thousands of people across Europe have protested against austerity measures being imposed by many European Union (EU) countries across the 27-member bloc to tackle rising fiscal deficit and high sovereign debt levels. Protests have been held in Madrid (Spain), Warsaw (Poland), Brussels (Belgium), Rome (Italy), Lisbon (Portugal), Riga (Latvia) and Athens (Greece). Trade unions say EU workers may become the biggest victims of a financial crisis set off by bankers and traders. In Spain, unemployment has doubled in just three years. Greece's unemployment figures are at their highest level in 10 years. In the UK, the government is planning to slash spending by up to 25 per cent in some areas. France has seen protests against an increase in the minimum retirement age.

Media reports suggest that UAE's Emirates Telecommunications (Etisalat) has offered major shareholder, the Kharafi Group, 1.7 dinars ($5.97) per share for its stake in Kuwait's Zain. Zain, however, in a statement, has said that its management has not received any such offer officially. Analysts too are sceptical. They expect the deal to run into regulatory hurdles in key markets such as Saudi Arabia, where both Zain and Etisalat compete for market share. Etisalat is the largest shareholder in Etihad Etisalat, which competes with former state-controlled monopoly Saudi Telecom and with Zain Saudi Arabia.

The US Senate has rejected a bill that sought to end tax breaks to US companies that outsource jobs to countries such as India to cut cost. The bill was rejected 53-45, with two abstentions. Four Democrats also voted with a united Republican caucus to block the bill. The bill primarily sought to deny employment tax exemptions for 24 months to companies that hire a non-citizen to replace a domestic worker. It also sought denial of any tax benefits for the cost of an American job that is shipped out or outsourced overseas. The rejection came a week after commerce minister Anand Sharma expressed India's concern over the protectionist policies being adopted by the US.

Air France-KLM and its cargo carrier Martinair are being sued by hundreds of European companies, led by Ericsson and Philips. The carriers face claims of up to €500 million in compen-sation for alleged air cargo price-fixing. The companies claim that they were overcharged about 10 per cent on international air freight between 2000 and 2007 due to an illegal price-fixing agreement between airlines. Dublin-based Claims Funding Interna-tional said it would serve the writ petition in what would be a record cartel damages claim against an airline in Dutch courts.