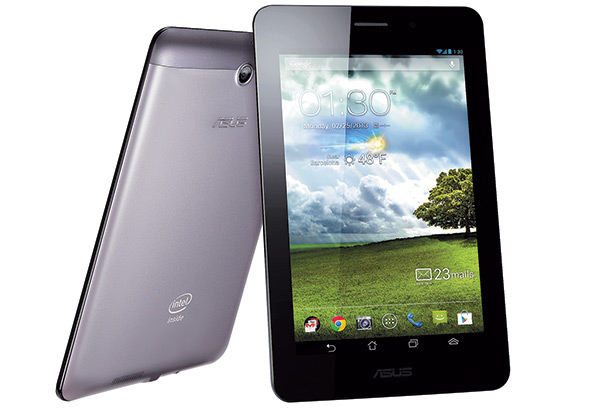 08 November, 2014
Print this article Font size -16+
There are few people who will adopt the Asus FonePad as their primary calling device; it’s just too big to hold up to one’s ear, not on the fringe like a phablet, which is big, but just about usable.

Holding up a 7-inch device to the ear is going to look outlandish and while you may not be bothered by the looks people give you, it’s just not convenient, especially if you’re rushing about. You could even end up dropping it because the grip is nowhere close to what it would be for a phone.
But to think of the calling facility as a bonus or use it as a second phone is much more understandable. The ideal combo would be if you have a small phone and the Asus FonePad. That way you will have the option of using the phone on the go and using the FonePad when you’re in one place, say, with the tablet resting and in speaker mode. Of course, that does mean two sim cards, but in India, we seem to be fond of them anyway.
Asus can’t seem to get away from the Fonepad-Padfone naming pattern, and that’s what they decided to name their twin to the Google Nexus 7 tablet (also made by Asus). It’s a little heavier and has a different back panel plus a strip at the top that can be removed, with some considerable damage to your nails, to insert the sim card and SD card. You can’t get at the battery, but that’s the norm with tablets and you don’t need to as it lasts a good nine hours. If you use it occasionally, you can stretch it over a couple of days. The Intel processor it uses is supposed to be optimised for longer battery life and for Android.
The FonePad is a perfectly workable tablet, but it’s getting tough to choose with so many of them being so very alike. In the cause of the FonePad, it has its own Google version to compete with.

The Nexus 7 is available at the same price, Rs, 15,999, on the Google Play store, but the specs of the two are different. The Nexus uses a Tegra 3 processor, doesn’t have 3G at this price, and, of course, doesn’t have calling. The version of Android it uses is the very latest, which is the reason why people buy the Nexus in any case, while the FonePad’s is a notch behind with the update promised. A warning about what you may hear about the “pure Android” experience. While it’s well suited to tech-savvy youngsters who know how to customise it and even develop apps, the average user is likely to be much happier with a device on which the manufacturer has put in some features and apps already, making it easier to use. The FonePad has some very light touches from Asus because they have put in some useful apps such as a note taker and a translate feature, but is otherwise quite “pure” in its Androidness anyway.
Instead you may consider whether it’s the FonePad you want or another 7-inch tablet, such as a low-cost one or one from Samsung Galaxy Tab 2 P3100 or successor or even the iPad Mini, which is a different experience from Android because of its universe of apps and, of course, its interface and system.
The FonePad has a nice though not overly crisp screen and the colours look pleasing and vibrant. It performs well too but the benchmark tests put it somewhere close to the Galaxy SIII. The cameras, front and back, are low-end and meant to be functional rather than for photography.
Check Out
Sony Xperia SP
I’ve always loved the transparent lighting-up strip on some of the Sony Xperia phones, and on the
Xperia SP, Sony’s recent mid-range smartphone, it is better than ever. It’s made up of three LEDs and sits at the extreme bottom of the phone, giving you a lot of information. You can set it to light up for your notifications including calls and SMSs. When your battery is low or charging, the colour of the light will tell you what’s going on. Moreover, the light glows to match the colour of the pictures you’re viewing. Music is fairly prominent on this phone, and there’s a full featured player with equalizer and booster and a speaker that’s loud without being in the least distorted.
As with the Xperia Z, the build is solid and just the right weight. It’s got a curved matte finish plastic back which has a little flex right in the centre. It comes off easily to reveal the battery — which you can’t remove. It’s a 2370 mAh rating, and so enough for the phone. The “Stamina” mode, featured on the Xperia Z, is also present here and it works to prolong your battery by turning connectivity off when not in use.
The Xperia SP doesn’t look or feel as big as it actually is and fits very comfortably in the hand. I’m just not an admirer of Sony’s phone screens and find the SP’s has the same properties I dislike — bad viewing angles, not enough contrast, not pleasing colours.
If you’re a phone camera enthusiast, you may be disappointed with the camera on this phone. It’s not that it’s 8 megapixels — it’s that the quality of pictures is just average.
At Rs27,490 the Sony Xperia SP is a bit overpriced and has a lot of competition, so be sure to check out price equivalents if you’re buying.