New Delhi [India], February 22 (ANI): Bollywood actor Taapsee Pannu, who has reunited with her 'Manmarziyaan' director Anurag Kashyap, on Monday shared a BTS photo of her with the filmmaker from the sets of their upcoming project 'Dobaaraa'.
The 'Pink' actor took to Instagram and shared a fun BTS picture from the sets of 'Dobaaraa' with Anurag in the frame.
Sharing the photo, Taapsee wrote, "My #DobaaraaSeries Coz some collaborations deserve to be repeated.... Ready to create more memories because we were running out of Manmarziyaan stories to tell... @anuragkashyap10 let's do this #Dobaaraa."
In the photo, Taapsee can be seen sitting on a chair and smiling with her hand on her forehead, while Anurag sits on her lap, making a peace sign with his fingers. 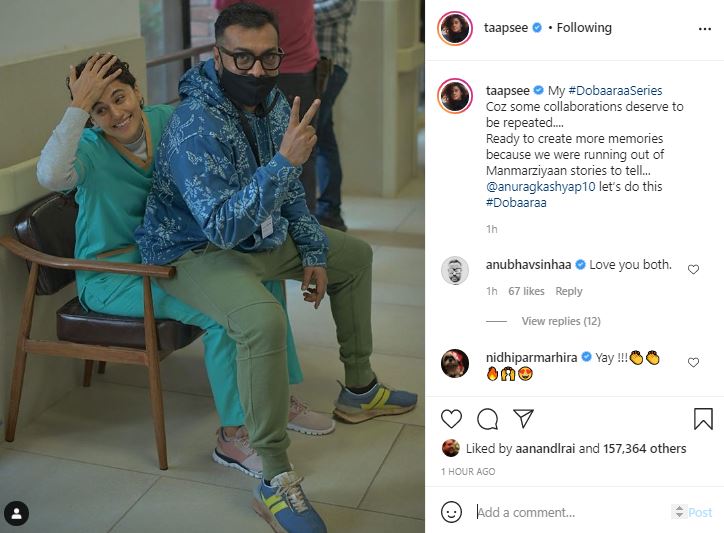 The upcoming film will mark the director-actor duo's third collaboration after 2018's hit 'Manmarziyaan' and biographical drama 'Saand Ki Aankh', which had Anurag on board as a producer.
'Dobaaraa' will be produced by Cult Movies - a division under Ekta Kapoor's Balaji Telefilms, along with Sunir Kheterpal's ATHENA and Gaurav Bose's The Vermillion World Production.
Anurag was last seen in 'AK vs AK', which was directed by Vikramaditya Motwane. The film also starred Anil Kapoor. His last release as a director was the Netflix film 'Choked' (2020), starring Saiyami Kher and Roshan Mathew.
Meanwhile, Taapsee has a flurry of films in her kitty including 'Shabaash Mithu', 'Haseen Dillruba', 'Rashmi Rocket', and 'Looop Lapeta'. (ANI)