Mumbai (Maharashtra) [India], January 17 (ANI): Bollywood star Taapsee Pannu who will be seen essaying the role of a sprinter in her upcoming sports drama 'Rashmi Rocket' on Sunday treated fans to a glimpse from her 'healthy indulgence' in laddoos and revealed that she isn't a 'protein bar kind of person'.
The 'Saand Ki Aankh' star hopped on to Instagram and shared pictures of herself binging on her favourite laddoos. 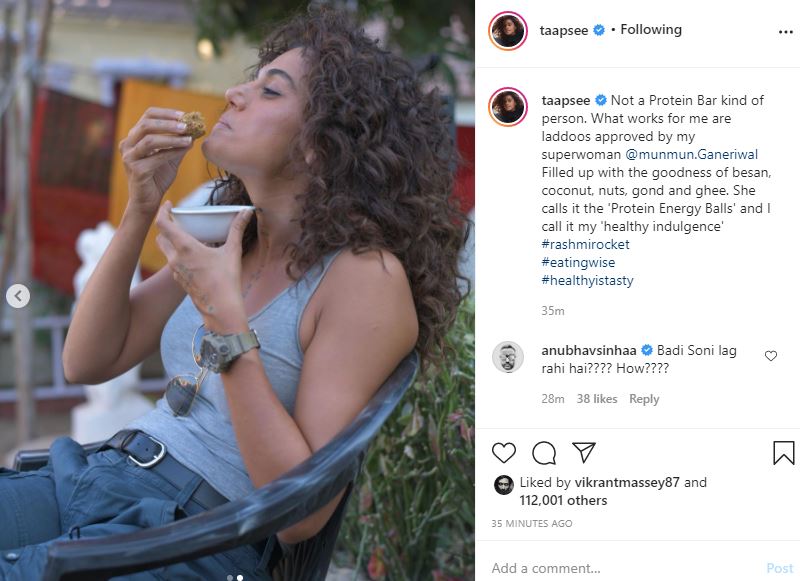 In the picture, Pannu is smilingly posing for the camera as she holds the savoury sweet, while she binges on it. Sporting a no make up look, the actor bore a casual style as she sported a grey tank top and cargo pants. The picture sees Taapsee as slightly tanned, while her luscious locks are styled into wavy curls.
Along with the photo, the 'Pink' star noted, "Not a Protein Bar kind of person. What works for me are laddoos approved by my superwoman @munmun.Ganeriwal ."
"Filled up with the goodness of besan, coconut, nuts, gond and ghee. She calls it the 'Protein Energy Balls' and I call it my 'healthy indulgence'#rashmirocket#eatingwise#healthyistasty," added Pannu.
The actor's upcoming sports flick is directed by Akarsh Khurana and co-produced by Ronnie Screwvala, Neha Anand and Pranjal Khandhdiya.
The drama, which chronicles the story of a girl Rashmi and her journey from a tiny village to athletic contests is expected to release sometime in 2021. Besides that, she also has 'Looop Lapeta' and 'Haseen Dillruba' in the pipeline. (ANI)