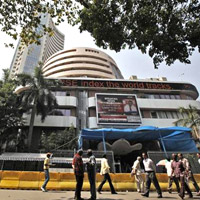 "The benchmark indices opened with a positive gap, extending Wednesday's momentum. However, it was unable to sustain itself at higher levels amid profit-booking ahead of the weekend," said Amar Ambani, head of research at India Infoline.

Tata Consultancy Services was the top gainer on the Sensex, climbing 4.92 per cent after it posted a better-than-expected 15.5 per cent increase in consolidated net profit for the first quarter.

As a result, Infosys and Wipro also moved up. The BSE-IT index, which rose 2.81 per cent, was the top gainer among sectoral indices.

The gainers included auto stocks led by Tata Motors and Reliance Industries, ahead of its results. The rise in the Sensex was capped by declines in ICICI Bank, HDFC, Sun Pharma, BHEL, L&T, HDFC Bank, Sterlite Ind, NTPC, Jindal Steel and Tata Steel.

Most Asian markets declined amid concern that growth in China and Japan's economic reforms may be losing stream.

Key indices in China, Japan, Singapore, South Korea and Taiwan dropped by 0.15 per cent to 1.62 per cent, while Hong Kong Hang Seng index firmed up by 0.08 per cent.

European stock markets slipped from an almost seven-week high in early trade as technology firms dropped in the wake of disappointing earnings from Google Inc and Microsoft Corp. Key indices in France, Germany and UK eased by 0.40 per cent to 0.46 per cent.