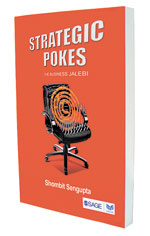 08 November, 2014
Print this article Font size -16+
In the first part of the trilogy, Jalebi Management, Shombit Sengupta compared the Indian industry to the workings of the jalebi, the crunchy creeper-like sweet dipped in sugar syrup. In the second, Strategic Pokes (Sage Publications), he says Indian corporates need to urgently rethink how to plan their businesses in the age of uncertainties.

Sengupta is the founder of Shining Consulting, a consulting firm in India and France, and knows his profession too well. He tries to co-relate real-life corporate success and failures with his various “disruptive” theories. One of his most agreeable conclusions is definitely that which focuses on the poor quality benchmarks of Indian companies. He goes on to propose that the lack of quality focus among Indian companies is driven by the core of Hindu religion since the religion itself is anchored in multiple gods, which takes away focus from a single objective and hence intrinsically allows for unstructured work around solutions. While on the face of it this may sound convincing, the fact that some of the most exquisitely detailed Hindu art and architecture of the 11th century, with painstakingly executed craftsmanship, is an outcome of the same religious code shows the rather abrupt and some-what fallacious conclusions of the author to simply buttress a hypothesis.

The author makes an impressive case for the role of ‘family’ brands and why, conceptually, it doesn’t work. He cites examples from fashion retail of multiple brands existing with an enterprise albeit with little ownership connectivity. This is indeed a stark reminder for Indian brands who need to rethink branding in the context of their global aspirations.
Sengupta delves deep into the IT services industry and provides brilliant insights on the risks the industry faces given its lack of innovativeness and absence of risk taking.

Overall, a reader may not be too sure of the context of a jalebi to drive strategic pokes or if it is relevant but then the book is about disruption! It is a must read for its uniqueness of thought and design as also why India can never be the next China!