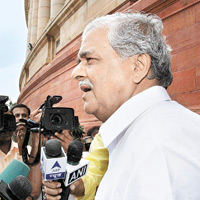 08 November, 2014
Print this article Font size -16+
The race to get things done has been on an overdrive after the Comptroller and Auditor General’s (CAG’s) August report on coal block allocations. The inter-ministerial group (IMG) — formed in June to review the development of coal blocks — has, in two weeks, already deallocated 13 blocks awarded to 29 companies.
The earliest of these was allocated in September 1999, when BJD’s Dilip Ray was minister of state, coal (independent charge). Two were allocated during BJP’s Karia Munda’s tenure. Three were given when JMM’s Shibu Soren was in charge of the coal ministry, six when Manmohan Singh held the coal portfolio and one by Congress’ Sriprakash Jaiswal. (See who allocated what in BW’s article published in issue dated 22 September 2012.) They’ve also finally decided to deduct bank guarantees (BGs) for tardy developers. So far, they’ve recommended BGs from 15 blocks.
The IMG met companies on 6-8 September to assess 31 coal blocks. The first recommendation came as early as 13 September. This begs the questions — are they taking steps in haste? And, was the IMG really needed? From 1993 to 2011, the coal ministry had already deallocated 24 blocks. A senior coal ministry official, who did not want to be named, said, “Back-to-back meetings don’t mean we’re trying to hurry anything.” He stressed the current process will be more transparent, and having officials from almost all allied ministries is a way of doing so.
The recommendations include well-known and obscure names but the case of Monnet Ispat and Energy may indicate that the IMG is being very cautious by naming even those with some progress. Monnet was asked to submit a BG for their Utkal B2 block (in Angul, Orissa), even though there was no provision for a BG when they were allocated the block. And the ministry’s note acknowledges substantial has been progress made. In essence, it is a retrospective measure. If implemented, the firm would have to submit a BG of Rs 81 crore with a condition to start production by March. They seem to have all the clearances in place. However, it is stuck at the state level. “Since the last one year Orissa has refused to sign any grant order (for the mining lease),” said its chairman Sandeep Jajodia. He is prepared to submit the BG. “We’ve made so much investment. We can’t afford to lose the block.”
It’s still uncertain what the ministry will do with the deallocated mines. It was initially suggested that the blocks be given to Coal India, which is looking for more assets. But the coal ministry official quoted earlier said they are unsure on the final course of action. “We may bring those blocks into competitive bidding,” he said. If that happens, it could take even longer to exploit the mines. Crisil, an analytical firm, is still working on the norms for auction.
The process, however, will weed out non-serious players who’ve been squatting on the assets. The IMG will sit on 9-10 October to review the coal blocks owned by public sector companies.