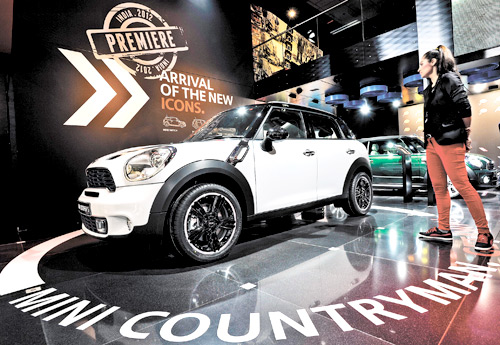 Two-wheeler Tussle
India's annual sales of 9 million two wheelers make it the largest market, second only to China. And that status is unlikely to be tampered given that the largest player —Hero MotoCorp — is going all out to prove that it is as potent a force alone as it was with Honda. Besides, competition between Honda Motorcycles, Yamaha and TVS will continue to keep the domestic market on the boil. "Public transport is not that developed in India, so the momentum will continue," says Roy Kurian, National Business Head at Yamaha Motors India. Atul Gupta, VP (sales and marketing), Suzuki Motorcycle India Limited (SMIL), believes that demand will come from the rural market, as affordability has not deteriorated in the two-wheeler segment.

break-page-break
Having acquired a 39 per cent stake in the Austrian bike-maker KTM, Bajaj bought KTM 200 Duke to India. Developed and built at the Chakan plant, the Austrian street-bike will be seen at the Bajaj Probiking showroom soon. The Austrian genes will also transfer to the future generation of the Pulsar — a 125cc model, built on a completely new platform, will be the first, followed by higher capacity models.

Japanese players SMIL and Honda Motorcycle and Scooter India (HMSI) are focussing on the volume market and are foraying into the entry-level segment with 100-110cc bikes. HMSI is keen on bringing technology-upgraded engines with high fuel efficiency, and its third factory in Karnataka is ready to ramp up production to four million units by 2013. Yamaha Motors India, on the other hand, is focussed on staying atop in the 150cc segment, with seven models. "We want to achieve 25 per cent market share in that segment before entering new segments," says Kurian. Yamaha has increased its market share from 9 to 15 per cent in the 150cc bike market.

Yamaha is also eyeing the fast-growing scooter segment, which it expects to grow at 20-25 per cent in the near-term. The first Yamaha scooter is expected later this year. Add to that the old Honda Activa and a new 110cc Hero Maestro, and the scooter race is set to heat up. India's first dirt bike, Hero Impulse, also made its entry at the expo.

The Green Brigade
Except for the 13-year-old Reva, India has no history of green vehicles. But three days before the inauguration of the expo, Bajaj Auto fired the first salvo with its 200cc RE60, named so to highlight the fuel-efficient four-wheeler engine emitting just 60 grams of CO2 for every kilometre. Toyota, however, stole the show with its hybrid Prius C. The compact car, known as ‘Aqua' in Japan, has a listed fuel efficiency of 35.4 km per litre, beating the current top Prius, which gives 32. The new Prius is equipped with a 1.5-litre petrol engine and an electric motor. But at Rs 25 lakh, it's a tad too costly. The technology is expensive due to high import duties. GM's Chevrolet Volt and Nissan's Leaf were the other green entries.

In terms of production-ready cars, Tata came up with a hybrid Manza. Mahindra had a hybrid SUV, along with an electrically-powered Verito and next generation Reva NXR. In its new avatar, India's own electric car is a true four-seater and can attain a top speed of 100 km per hour. The car will run 160 km on full-charge, double than that of its predecessor.
That apart, there are more takers for the CNG/ LPG route. Maruti has a CNG option in five models; GM, Hyundai and Toyota offer CNG-fitments in some. Among LPG variants, Hyundai's Eon was the new face.

Eye On Luxury
Even as affordability remains the key driver for car sales, a burgeoning upper-class is making the luxury carmakers scramble for their attention. They too have small car plans going forward. Germany's Mercedes Benz  showcased its B-class compact cars. The compact, expected to be launched in the later-half of 2012 for less than Rs 20 lakh, was parked beside super-performance roadster the SLS-AMG and the A-class concept — to be launched in 2013. "We plan to launch 5-6 models each year for the next couple of years," says Peter Honegg, managing director and CEO of Mercedes-Benz India.

For BMW, the focus would be on retaining its 40 per cent market share. It had its small luxury car brand Mini including the iconic three-door Cooper hatch, the Cooper convertible and the Countryman SUV priced at Rs 25 lakh. BMW's new M5 sports saloon, is priced close to Rs 1 crore. "The focus will not be on volumes for the Mini. We will build it up as an ultimate luxury brand," says Andreas Schaaf, president, BMW India. BMW also presented its concept vehicle — Vision Connected Drive, which uses futuristic technology and fibre optics to help the car communicate with the driver.

Meanwhile, Audi India is confident of taking the second position in the domestic market. "We are the fastest growing luxury car maker in India. We plan to overtake Mercedes in the next 18 to 24 months," says Michael Perschke, Head, Audi India. Upping the ante in the technology arena, Audi showcased three concepts — E-tron, Ultra and Connect, which it believes will redefine mobility.