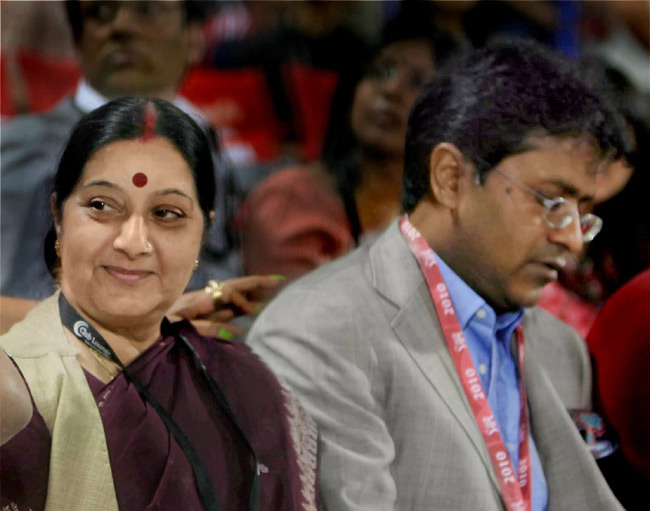 16 June, 2015
Print this article Font size -16+
External Affairs Minister Sushma Swaraj was on Sunday (14 June) at the centre of a major row over helping scam-tainted former IPL chief Lalit Modi to obtain British travel documents but found strong support from the government and the BJP which rejected opposition demands for her resignation over alleged "impropriety".
The genesis of the controversy was disclosure of emails showing that she had spoken to Indian-origin British MP Keith Vaz and its High Commissioner here James Bevan favouring the grant of travel documents to Lalit Modi to go to Portugal, purportedly for his wife's cancer treatment in June last year.
Modi, who is wanted in India, has made London his home since 2010 to avoid a probe for alleged foreign exchange regulation violations in the T20 cricket tournament held in South Africa in 2009. The previous UPA government had revoked his passport and had pressed for his extradition.
According to British media which quoted leaked emails, Vaz cited Swaraj's name to put pressure on UK's top immigration official to grant British travel papers to Lalit Modi, who subsequently got the documents in less than 24 hours.
Vaz also offered to help Swaraj's nephew Jyotirmay Kaushal to apply for a British law degree course, the report said.
After the reports surfaced, 63-year-old Swaraj said in a series of tweets that she had taken a "humanitarian view" and conveyed to the British High Commissioner that they should examine Modi's request as per their rules and "if the British government chooses to give travel documents to Lalit Modi that will not spoil our bilateral relations".
Facing opposition attack, Swaraj said, "What benefit did I pass on to Lalit Modi - that he could sign consent papers for surgery of his wife suffering from Cancer?... He was in London. After his wife's surgery, he came back to London. What is it that I changed?"
She also reportedly spoke to Prime Minister Narendra Modi explaining her position on the issue.
Opposition parties demanded her resignation, alleging grave impropriety on her part in helping a fugitive from law.
Congress questioned even the role of the Prime Minister as to whether her action had his "tacit" endorsement.
Contending that the Prime Minister's role was under a "cloud of suspicion", Congress posed 11 questions to him, including "what happens to transparency and non-corruption" promise made by him.
However, the government, the BJP as well as RSS, strongly "justified" Swaraj's action and rejected resignation demands.
Home Minister Rajnath Singh and BJP chief Amit Shah asserted that she had done no wrong and only acted on "humanitarian" grounds.
The government support was expressed after Home Minister Rajnath Singh met the Prime Minister.
Opposition Wants Swaraj To Resign
Opposition parties today demanded the resignation of External Affairs Minister Sushma Swaraj for "helping" fugitive former IPL boss Lalit Modi secure travel documents in UK but the embattled leader found strong support from the government, BJP and RSS.
Congress led the charge against Swaraj and dragged Prime Minister Narendra Modi into the raging row, wondering if her help to the former IPL Commissioner had his "prior approval".
It demanded an answer from Modi what would happen to his promise on black money when his government was helping a man accused of laundering money to the tune of Rs 700 cr.
People are asking "is (PM Narendra) Modi helping (Lalit) Modi," Congress spokesman Randeep Singh Surjewala told a press conference where the main opposition party demanded her resignation.
Rejecting Swaraj's defence that she helped Lalit Modi on "humanitarian ground", Surjewala alleged a quid-pro-quo, saying that he had helped her husband Swaraj Kaushal in securing admission for his nephew in a UK university in 2013 and he enjoyed proximity to BJP leaders, including its president Amit Shah.
Latching onto the controversy, senior party functionaries Digvijay Singh, former Foreign Minister Salman Khurshid and its Leader in Lok Sabha Mallikarjun Kharge demanded that she quit and asked the Prime Minister to "come clean".
She, however, found surprise support from Samajwadi Party which said her help to Lalit Modi was "perfectly al right" as people in power have to accomodate requests of people in need.
A beleaguered Swaraj was strongly defended by the government and BJP as they defended her and rejected opposition demand for her resignation.
Home Minister Rajnath Singh met the Prime Minister and later said, "We want to make it clear that whatever she has done is right. We justify it and the government completely stands by her."
BJP chief Amit Shah also strongly defended Swaraj, saying she had acted in a "humanitarian" manner and "no big moral" issue was involved.
The party's ideological mentor RSS too rallied around her.
Its senior functionary Indresh Kumar said she was full of "patriotism and nationalism and has never compromised on these two things."
CPI leader D Raja said, "Narendra Modi owes an explanation to the country on impropriety committed by Swaraj", while CPI(M)'s Brinda Karat termed the matter as a "case of grave impropriety" and said "it is the duty of the Prime Minister to answer".
JD(U) spokesperson K C Tyagi "condemened" Swaraj's action.
AAP spokesman Ashutosh said Swaraj has "no option but to resign" and demanded that Prime Minister sack her if she does not step down. Lalit Modi was wanted in criminal offences in India and her help to him was not acceptable, he said.
Senior Congress leader Digvijay Singh said, "I did not expect that she would help Lalit Modi, against whom government has issued a look-out notice, procure travel documents...I appeal to Sushma Swaraj ji to immediately resign on moral ground."