Towards the end of the five-minute and 53-second long video, Kher strongly requested people to spread love, positivity, and compassion.

Veteran actor Anupam Kher on Sunday got emotional after addressing the bond he shared with the late actor Sushant Singh Rajput and exhorted people to spread love, compassion.

The actor, in a video message, shared on Instagram, explained how their father-son relationship portrayed on- screen for the film 'M.S. Dhoni: The Untold Story,' had managed to build a bond between them off-screen as well.

A visibly shattered looking Kher recalled the times spent with Sushant during the movie shootings and explained him as a very "positive, energetic" person who was always curious to do more and more. 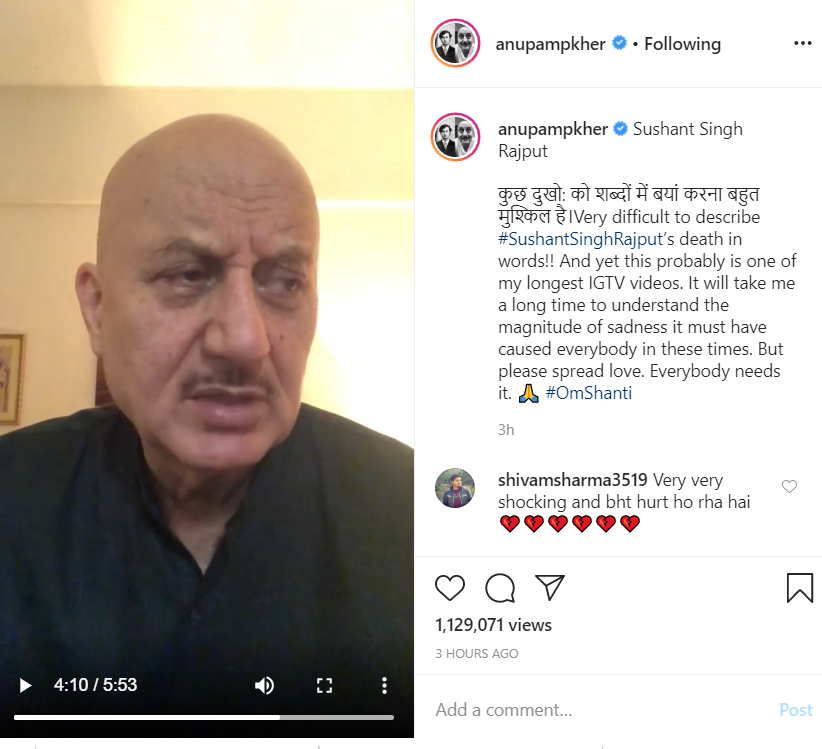 Though a strong bond, the 65-year-old actor confessed that he could not become much closer to Sushant during the shoot because of the shooting pressure.

Towards the end of the five-minute and 53-second long video, Kher strongly requested people to spread love, positivity, and compassion.

He asked people to extend a friendly hand and communicate more often as one would never know what the other person is going through.

The video was put within hours of the demise of 'Kai Po Che' actor, Sushant Singh Rajput, who allegedly committed suicide at his Bandra residence by hanging himself in Mumbai on Sunday, the police said.

However, no suicide note has been recovered from Rajput's residence, as per the police and further investigation is underway.

The untimely death of the versatile actor has sent shock waves among celebrities and his fans alike.
Earlier actor Deepika Padukone, too, shared a written statement on Twitter addressing the importance of reaching out to somebody while battling mental health issues.

Scores of actors from across the nation took it online to share their grief and sorrow with the untimely demise of the young actor.