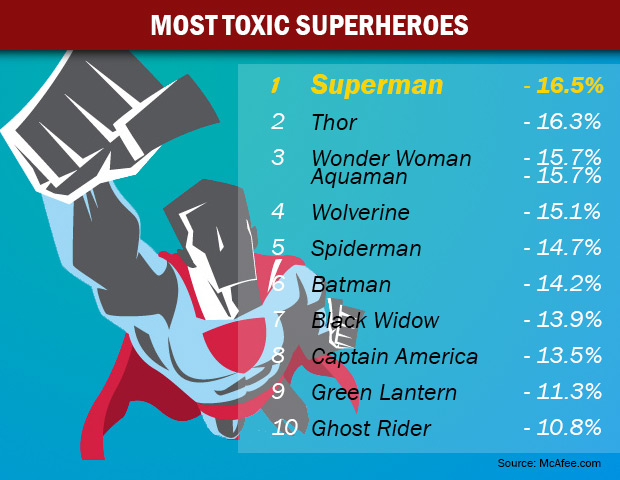 08 November, 2014
Print this article Font size -16+
Most of us have grown up on a steady diet of superheroes fighting super villains and saving the world. The superhero might be the epitome of courage, justice, and strength, but of late he is also turning into the biggest threat online.

McAfee just released a study on the Most Toxic Superheroes, using McAfee® SiteAdvisor® site ratings. The study found that superhero searches led to the most risky websites and the Man of Steel tops the list. The study determined that searching “Superman,” “Superman and free torrent download,” “Superman and watch,” “Superman and free app,” and “Superman and online,” yields a 16.5 per cent chance of landing on a website that has tested positive for online threats, such as spyware, adware, spam, phishing, viruses and other malware.

The top 10 villainous superheroes for online surfers this year are:

(the per cent indicates chance of landing on a website that has tested positive for online threats such as spyware, adware, spam, phishing, viruses or other malware).

The list this year has two female superheroes – Wonder Woman and Black Widow. Last year’s number 1 most toxic superhero, Aquaman, has sunken to the number 3 spot to tie with Wonder Woman.

Be suspicious: If a search turns up a link to free content or too-good-to-be-true offers, be wary
Beware: Of content that prompts you to download anything before providing you with content. You may want to opt to watch streaming videos or download content from an established site, such as Hulu, Netflix, NBC, or ABCtv.
Free downloads: Are significantly the highest virus-prone search terms. Anyone searching for videos or files to download should be careful not to unleash malware on their computer.
Double-check the web address: Look for misspellings or other clues that the site you are going to may not be safe.