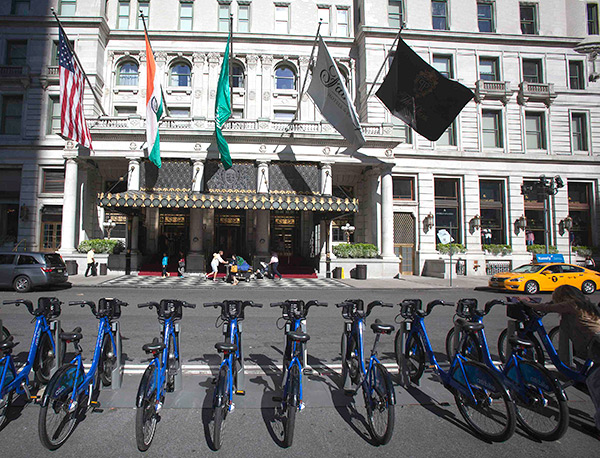 08 November, 2014
Print this article Font size -16+
A spokesman for the Sultan of Brunei dismissed a report by the Wall Street Journal online that he had made a bid for New York's Plaza Hotel, Dream Hotel and London's Grosvenor House hotel.

The Journal's website edition reported on Saturday, citing people familiar with the situation, that an investment firm affiliated with Brunei had offered to pay $2 billion for the three hotels, which are currently owned by India's Sahara conglomerate.

"Neither His Majesty, the Brunei Investment Agency, nor the government of Brunei are involved in any way in the purchase of the Grosvenor House in London or the Plaza and Dream Downtown hotels in New York," a spokesman at Bell Pottinger, acting on behalf of the Sultan of Brunei, wrote in an email.

Brunei has been criticized by civil rights and gay rights advocacy groups in the United States for becoming the first East Asian country to adopt sharia criminal law, which punishes sodomy and adultery with death by stoning.

The City of Beverly Hills voted in May to pressure the sultan's luxury hotel operator, the Dorchester Collection, to divest the Beverly Hills hotel.

The Journal story made headlines in India, where Sahara is best known as the long-time former main sponsor of India's national cricket team.

Its chairman, Indian tycoon Subrata Roy, has been negotiating a sale of the hotels from a makeshift office in prison in New Delhi. He wants to raise $1.6 billion for bail.

Roy has been held for more than five months after failing to appear at a contempt hearing in a long-running dispute with regulators over his group's failure to repay billions of dollars to investors who were sold outlawed bonds.

The group is also looking to sell the Dream Hotel in midtown Manhattan.