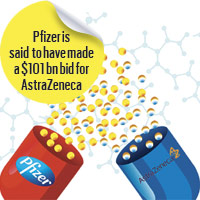 08 November, 2014
Print this article Font size -16+
Amid talk of a bid from Pfizer, British pharma firm AstraZeneca announced faster-than-expected progress of its experimental cancer drugs. It also said it plans to spin off billions of dollars of non-core assets. AstraZeneca declined to comment on a newspaper report that said it had spurned a $101-billion approach from the US pharma giant. The paper cited senior investment bankers and industry sources as saying that informal conversations about a deal had taken place between the two but that no talks were currently under way after AstraZeneca resisted the approach. Instead, CEO Pascal Soriot said he remained focused on sharpening AstraZeneca’s portfolio, and as part of that unveiled plans to sell or partner infection and neuroscience units with combined sales of $3.5 billion in 2013.

Covering All Bases
The board of Italian bank Monte dei Paschi di Siena approved a proposal to boost the size of a planned share sale to €5 billion to help cover any gaps that a Europe-wide bank check might find in its finances. Italy’s third-largest bank held a board meeting after saying that it was evaluating how much capital it needed ahead of an asset review by the European Central Bank (ECB) and after discussions with the Bank of Italy. CEO Fabrizio Viola said increasing its capital by €2 billion more than initially planned would give the bank an extra buffer to plug any gap the ECB review might uncover. He said the fundraising would also mean the bank could honour its pledge to pay back €3 billion of a €4.1 billion state bailout this year. The remainder is due to be reimbursed by 2017 but could be repaid early if the results of the ECB review are benign, the bank said.

Keeping It Simple
Swiss drugmaker Novartis recently announced a multi-billion-dollar revamp, swapping assets with GlaxoSmithKline (GSK) and selling its animal health arm (to Eli Lilly) in a bid to simplify its business and increase its focus on high-margin cancer medicines. The overhaul is part of a major realignment in the global pharma industry as it strives to cope with a clampdown on health spending by cash-strapped governments. Novartis said it had agreed to buy GSK’s oncology products for $14.5 billion, while selling to GSK its vaccines, excluding flu, for $7.1 billion plus royalties and creating a joint venture with GSK in consumer healthcare. The global pharma sector has seen a flurry of deal-making recently as large firms focus on a small number of leading businesses, while smaller specialty and generic producers seek greater scale.

New Ground
Sony Corp will reportedly branch out into the real estate business in August and plans to take the unit public in three years. Sony recently set up a real estate unit in Tokyo, with the aim of generating annual sales of 50 billion yen in five years. This new venture marks the first initiative of a new project team at Sony that aims at developing over 10 new businesses over the next three years.

Initial Cheer
China’s market regulator, China Securities Regulatory Commission, has posted draft initial public offering (IPO) prospectuses of 18 firms, bringing the total number of potential issuers to 46. State media estimates the IPOs could raise as much as $3.6 billion. This, on top of a two-month flurry of IPOs in January and February, indicates the return of good times to the Chinese markets.

Caught In A Web
Mexican mobile phone operator Iusacell SA de CV sued IBM on 22 April, accusing the US tech giant of making fraudulent representations that caused it to lose $2.5 billion in profits. The lawsuit, filed in a federal district court in New York, centred on a contract that Iusacell said IBM induced it to enter. IBM knowingly misrepresented and wrongfully concealed from Iusacell material facts both before and during the parties’ relationship, Iusacell said in the complaint. The lawsuit seeks $2.5 billion in damages.

Meaty Issue
Kraft Foods is recalling around 96,000 pounds of Oscar Mayer Classic Wieners because the packages instead contain Classic Cheese Dogs made with milk, a known allergen. The product labels are incorrect as they do not reflect the ingredients associated with the pasteurised cheese in the cheese dogs, the US Department of Agriculture’s Food Safety and Inspection Service (FSIS) said. The products were formulated with milk, which is not declared on the product label, the FSIS said.

The Elite
Merrill Lynch is dangling a new incentive in front of its brokers by creating a ‘recognition club’ for those who bring in $8 million-plus a year from clients — more than doubling the top goals set by its securities industry rivals. The new Pinnacle Club will pay its members $10,000 in cash if they produce $8 million in revenues. Plus, members get bragging rights as elite brokers — they can advertise their status on websites and get priority when accounts of departing brokers are redistributed or when customers are referred from other arms of Bank of America.

Smart Option
Goldman Sachs Group’s asset management business has agreed to buy Westpeak Global Advisors, a firm that aims to beat market indices by using factors other than company size to pick stock investments. The deal comes at a time when Goldman is working to bulk up its asset management unit, partly by strengthening its quantitative product offerings. It is also part of a broader trend of money managers offering so-called ‘smart beta’ strategies that deliver the high returns of some actively managed funds but with the lower cost of investing as in an index fund or exchange-traded fund.