Such A Tough Drive 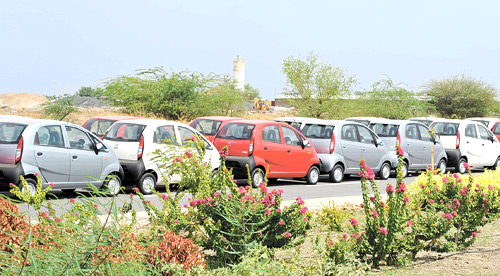 
India's largest car maker Maruti Suzuki, which sells close to half of the total passenger cars (966,447 cars out of the total sales of 1,982,702 units in FY2011) has asked dealers to avoid ‘de-growth'. "We used to sell 450 cars a month last year. It is down to 400 now," says a dealer.  "During Navratras last year, we saw 270 bookings for the first day of the festival. This year, we may not touch that number for the entire festive season," adds another.

It is a double whammy for the car maker. It is not just poor demand. Labour issues at its Gurgaon plants have led to a 6 per cent drop in production this fiscal, leading to a delay in the launch of the new Swift. It has stopped taking orders for the high-selling hatchback, reducing its sales pipeline. You don't have to wait anymore for Maruti's offerings save for the Swift and Dzire; dealers are pushing sales through cash and fuel discounts. At Renault, Len Curran, vice-president (sales and marketing) says "Demand has tightened significantly across all brands and customer segments compared to the first quarter. It remains to be seen if this year's sales will overtake last year's."

Eyes On The Road
There has been a dip in car sales in August for Maruti Suzuki, Hyundai Motors and Tata Motors — at 7.5 per cent, 19.2 per cent and 39.5 per cent, respectively. Due to far smaller bases, others were in the positive — General Motors or GM (11.3 per cent), Honda (25.2 per cent), Toyota (505.8 per cent) and Volkswagen (72.5 per cent) on the back of discounts, new models and diesel variants. Tata Motors' sales dip means 8,804 units less than last year; that is higher than the 7,963 more units sold by Toyota and Volkswagen together in August this year.

Poor sales have led to inventory pile-up and production cuts. A Ford dealer in Bangalore has 100 cars which will not be driven away in a hurry. "The target is to sell 450 cars a year. We managed to sell 350. That's an inventory cost of at least Rs 6 crore this year," the dealer says. The demand is for inexpensive diesel cars; the new Fiesta is yet to gain traction. The punt is the Figo, and Fiesta Classic diesel variants could save Ford dealers from inventory woes.

"Our stocks last 40-45 days now, down from 25 days of inventory last year," says a Maruti dealer. You can drive off in a car with a colour of your choice. Tata Motors has cut production by more than 14 per cent in the past five months as sales dipped 18 per cent to 119,939 units. Nano is a real bad story. There are thousands of Nanos lying in its Sanand plant in Gujarat as of September.  At Volkswagen, it is only a little better. It recorded a huge growth of 172.5 per cent during April-August. But look closer, it is a different picture. It sold 76.7 per cent of the cars it produced, which is lower than the 92.4 per cent sold in the comparable period last fiscal. Sources say that there are about thousands of Polos lying unsold at Volkswagen's yard in Maharashtra.

Here is Renault's Curran on the inventory logjam: "In Renault India, inventory is carried by the dealer and the manufacturer to ensure availability of products at the point of sale. While we don't consider dealer inventory as being on our books, we still have targets to ensure that the inventory is under control and managed." Renault India, with plans to launch five models by 2012-end, has sold 919 units of its mid-sized premium sedan Fluence since its launch in May. The French carmaker introduced its Koleos SUV earlier this month. It will be a tough ride.

break-page-break
A GM dealer says the company will have no car launches except for the revamped Tavera. He is fine with a ‘normal' inventory of 50 cars or at worst 75 cars on a target of 500 cars. It will get spooked if he manages to sell just 300 cars. All car companies BW contacted declined to comment on the inventory build-up and its impact on the working capital cycle. "This has been a bad Ganesh Chaturthi and Diwali season for us, worse than 2008-09," says a dealer from Pune.

The Diesel Skewer
The recent petrol price hike has helped bookings of the Beat Diesel, but hurt sales of the Spark, the Optra Magnum and the Aveo petrol versions. GM is still to pack off 5,000 cars to its dealers in Talegaon, Maharashtra. "Sales perked last month because of the Beat Diesel," says a GM dealer.

Honda has paid the price. India's highest selling mid-size sedan Honda City has been hit by Volkswagen's diesel offering, Vento. In the first half of 2012, City's sales dropped to 16,083 from 17,268 a year ago; Vento sold 13,591 units. It forced Honda to cut its price for the first time in June to make the City Rs 66,000 cheaper. It went on to offer a hefty discount of Rs 1.50 lakh on its hatchback Jazz. Discounts of up to Rs 30,000 on hatchbacks have become the norm.

Toyota and GM have also launched the diesel variants of their compacts and hatchbacks. While the tactic does help to keep buyer interest alive in their brands, what goes unnoticed is how the move impacts the sales of the petrol variant of the same car. Fiat, for example, offers diesel versions of its Punto and Linea at the price of its petrol version. "It is 75:25 diesel to petrol for Verito sales," says Arun Malhotra, vice-president (sales), Mahindra & Mahindra, which grew 35 per cent during the April-August period.

J.D. Power says the petrol hike will partly hurt Maruti models like the Alto and Wagon R as entry level buyers stay away from the market. It goes to add that the absence of a clear auto fuel policy from the government, especially its stance on diesel pricing, is further compounding the problem for car makers.

Car makers are trying hard to push sales. "There is a push strategy in the auto sector," says analyst Vishal Srivastava of CARE Ratings. For example, if a dealer buys 10 units of a high-selling car, he will have to buy five units of a relatively low-selling car from the company. This helps the companies to push the sales of their low-selling models. But as Malhotra notes:  "You can push for a month, but ultimately when you have stocks in the plants and the dealerships, then you have to cut down production. A push strategy works for 15-20 days. It can't go on for three to four months because it is a high-value product."

It is going to be a long and lonely drive ahead.